Update Required To play the media you will need to either update your browser to a recent version or update your Flash plugin.
By Carolyn Nicander Mohr
13 January, 2016

The company is now providing the service in 190 countries around the world. As of January 6, Netflix service is available in 130 more countries, up from the 60 it already serves.

The Chief Executive Officer of Netflix, Reed Hastings, made the announcement at the Consumer Electronics Show in Las Vegas, Nevada. 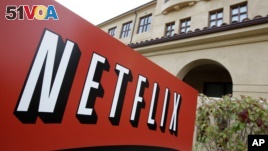 "Right now, you are witnessing the birth of a global TV network," he said at the event. "Whether you are in Sydney or St. Petersburg, Singapore or Seoul, Santiago or Saskatoon, you now can be part of the Internet TV revolution."

A Netflix statement said, "Pricing is fairly similar around the world. New markets will be priced starting at $7.99 per month or the local currency equivalent."

A free trial for one month is offered in the countries where the service is available.

Some of the countries where Netflix will not be offered include China, North Korea and Syria.

Not all programs available on Netflix will be offered in all countries. But some Netflix original shows can be streamed in all 190 countries. They include productions such as Marvel's Daredevil and Marvel's Jessica Jones, Narcos, Sense8, Grace and Frankie, and Marco Polo.

Until recently, Netflix supported program content in 17 different languages in addition to English. The company now has added three more languages. They are Arabic, Korean, and Simplified and Traditional Chinese. Not all shows are available in all languages. For now, some are only available in English.

Reed Hastings noted that, "From today onwards, we will listen and we will learn, gradually adding more languages, more content and more ways for people to engage with Netflix. We're looking forward to bringing great stories from all over the world to people all over the world."

Are you a fan of streaming media? Are you excited that Netflix is adding more countries to its streaming media service? Has Netflix come to your country yet? Share your thoughts in the Comments section below or on 51VOA.COM.

peninsula – n. a piece of land almost surrounded by water