Update Required To play the media you will need to either update your browser to a recent version or update your Flash plugin.
By Phil Dierking
07 November, 2017

The Netherlands continues for the second year to have the best non-native English speakers, while Laos had the lowest English proficiency rate of any country.

These are just some of the findings from the 2017 English Proficiency Index report. The private education company Education First, or EF, released the findings on Wednesday.

This is the seventh such report produced by the business. It examined the English language knowledge and ability of adults in 80 countries.

The results do not represent the English ability and language skills of everyone living in a country. They are instead the results of an online test, called the EF Standard English Test or EFSET. More than one million people took EFSET during 2016. You can take it online for free.

The company has offices and established partnerships around the world. "We have 500 schools and offices in 54 countries," noted Minh Tran, EF's director of research. "And in countries where we don't have a local office we have a team of worldwide agents that help us recruit test-takers."

Europe still strong, but not growing 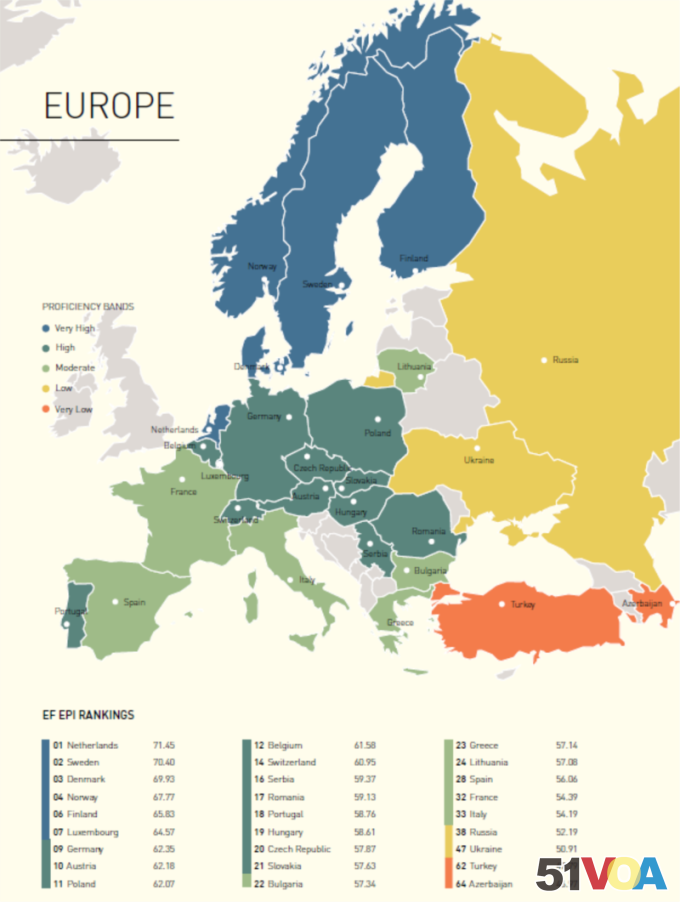 In the latest study, Europe had the highest overall average of English language proficiency for any area. The Netherlands was at the top of EF's list, followed by Sweden, Denmark, and Norway. They each earned a "very high" proficiency rating and were among the top five countries in the world.

The report said that European countries with high English proficiency ratings are alike in a number of ways. Often their students are required to take English as a foreign language, beginning at the primary school level. The countries also use teaching methods that emphasize speaking over memorization of grammar rules. Finally, citizens of these nations are more likely to meet up with English speakers, through travel or media contact, than other areas.

However, while Europe had the highest overall proficiency average, that average is not improving. The report notes that in many places, English proficiency levels are too low to be used effectively in the workplace. It adds that the rise of nationalist politicians and ideas may have an effect on how much effort European countries put into English learning in the future.

Adults in Asia rated strongly in English proficiency, which is why the area rated second highest in the latest study, after Europe.

The most notable result is Singapore, which was the highest-rated country for English proficiency in Asia, and had the fifth highest ranking in the world.

This was Singapore's first time to rank in the top five. It was among the most improved Asian countries over the past year.

According to Minh Tran, one reason the rating for Singapore improved was the education system.

"Singapore is hailed as one of the best education systems in the world, and they're able to get their students to do some of the most difficult things in schools academically."

He added that while all countries have some students who perform well, the difference with Singapore is that nearly all of its students perform at a very high level.

A first look at Africa

This is the first year the EF report has had enough information to rate English proficiency in Africa. As a whole, Africa ranked just below the world average, but higher than both Latin America and the Middle East.

South Africa ranked first on the continent, and was the only country at the "very high" proficiency level. Libya had the lowest proficiency rating in Africa.

One interesting finding was that women outperformed men on the test in Africa at higher rates than in any other part of the world. African women also had higher proficiency ratings than the global average for women. 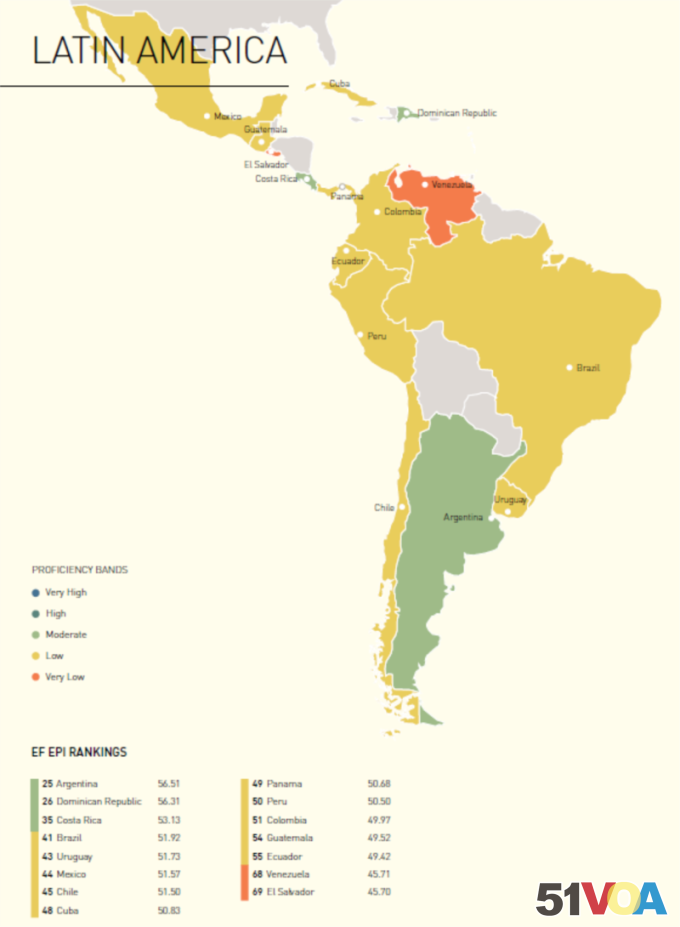 Latin America continues to rank low on the English proficiency index, with most countries falling into the "low" proficiency rating.

Argentina is the only South American country with a "very high" rating. Yet its proficiency levels were lower than last year.

The one promising result the study found was that the proficiency ratings for most Latin American countries improved from 2016 levels. 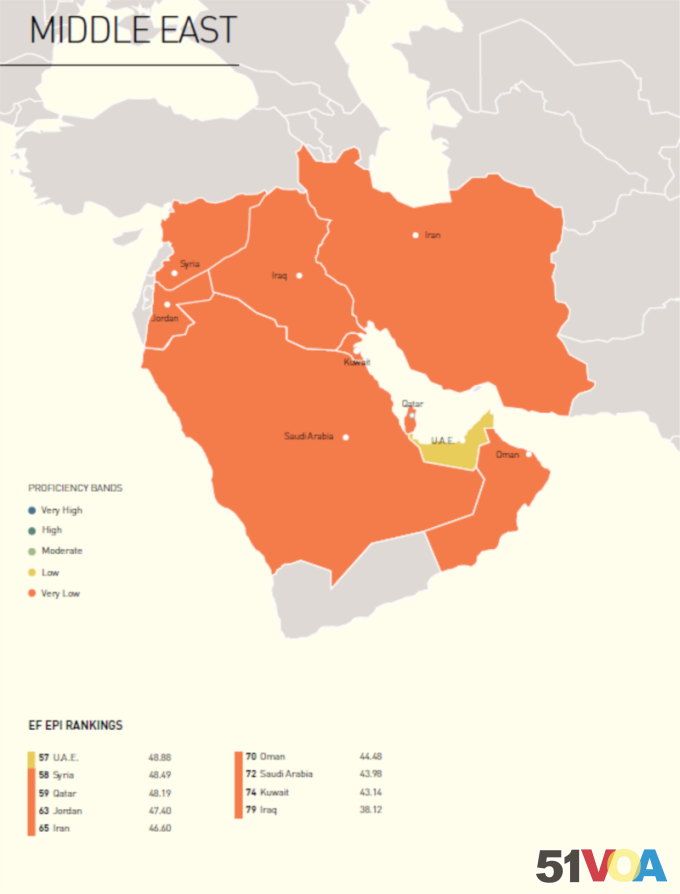 The new report says the Middle East continues to be the lowest performing region in English proficiency. It was the only area to rank in the "very low" proficiency grouping -- well below the world average.

However, almost every country improved over the past 12 months, with Saudi Arabia having the highest improvement rate of any country in the world.

The report identified several reasons for the Middle East's low ratings. It noted that violence or conflict in some areas makes it impossible to develop or provide a strong education system for students. EF's Minh Tran says even in countries without conflict, the local education systems are not strong enough to provide quality English teaching.

He noted that EF has found a very clear link between the country's English level and the average number of years that a student spends in public schools.

The study had other interesting findings. In general, English proficiency levels among women were higher than those for men. On average, women in most countries were more educated than men, and more likely to complete secondary school and attend college. However, the differences between the sexes appear to be getting smaller from year to year. 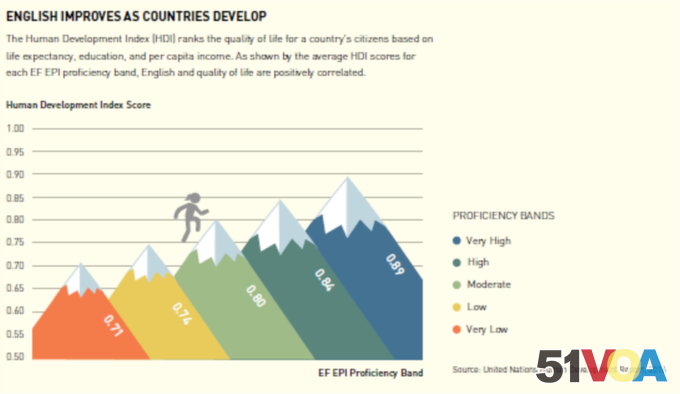 Also, EF officials say English proficiency levels appear to be linked with innovation and economic development. Countries with better internet connections, investment in research, and service exports all have higher English levels. In addition, the higher a country ranks on the Human Development Index, the higher its English proficiency score was, on average.

For those interested in taking the EFSET English Proficiency Test, you can find it on the EF website here.

How well does your country speak English? Do you agree with the report's findings? We want to hear from you. Write to us in the Comments Section or on 51VOA.COM.

proficiency - n. being good at something

academic - adv. of or relating to schools and education

according (to) - prep. as stated, reported, or recorded by

emphasize - v. to give special attention to something)

overall - adv. with everyone or everything included

recruit - n. to find suitable people and get them to join a company, an organization, the armed forces, etc.