Update Required To play the media you will need to either update your browser to a recent version or update your Flash plugin.
By Bryan Lynn
18 October, 2016

The world is getting its first look at Russian President Vladimir Putin's official 2017 calendar.

The calendar shows many sides of the Russian leader.

Some photographs show Putin doing hard things, such as sitting in a fighter airplane or climbing onto farm equipment.

Other photos seem to show his softer side. In one picture, the Russian leader is seen smiling while cuddling a cat. In another, he is holding a child while on a ski trip.

Other pictures show him standing by the sea in scuba diving equipment, riding a horse, sitting in a tree, and meeting with World War II veterans. 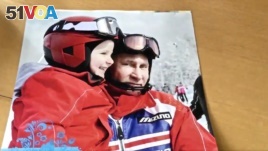 One photo seems like it would appear in a fashion magazine. In it, Putin is wearing dark sunglasses and the latest in men's clothing.

The BBC's Moscow correspondent, Steve Rosenberg, got one of the first copies of the new calendar. He made a short video of the photos, which he later posted to Twitter.

"Putin with a candle, Putin with a child, with a kitten, Putin by himself, with war veterans, and so on and so on," Rosenberg said in the video.

Rosenberg added that the 2017 calendar ends with a look ahead to 2018. He translated a statement from Russian into English. He read the statement, which the calendar says came from Putin himself. 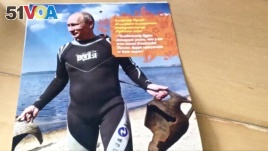 Bryan Lynn wrote this story for VOA Learning English. His story was based on reports from VOA News and BBC. George Grow was the editor.

calendar – n. something documenting the days, weeks and months of the year

cuddle – v. to hold someone or something to show affection

ski – n. two long, narrow pieces of wood that are used to slide on snow

scuba diving – n. sport in which people swim under water

veteran – n. person who served in the military

candle – n. stick of wax that you burn for light

self-sufficient – adj. able to meet your needs with your own resources