Update Required To play the media you will need to either update your browser to a recent version or update your Flash plugin.
By Anne Ball
14 August, 2016


The search for new drugs to fight infections has led to a discovery in an unlikely place — in people's noses.

What researchers found in noses is a compound called lugdunin. It fights a human bacterium responsible for the "superbug" infection known as MRSA.

MRSA is short for Methicillin-resistant Staphylococcus aureus. It is considered a "superbug" because it resists many antibiotic drugs. The result is many people die from the infection. 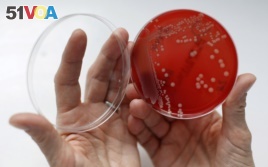 FILE- An employee displays MRSA bacteria strain inside a petri dish containing agar jelly for bacterial culture in a microbiological laboratory in Berlin.(Reuters)

The Centers for Disease Control and Prevention says there are 80-thousand cases every year in the United States, and 10-thousand people die from MRSA.

The journal Nature Microbiology published a report about the discovery of lugdunin last month. The research team reported that the compound, produced by another bacterium, has been effective against the "superbug."

The Staphylococcus aureus bacterium is commonly known as staph. Many people carry the staph harmlessly in their bodies, in addition to billions of other microorganisms. But it is a different story if this bacterium gets into a person's blood. S. aureus can quickly spread throughout the body with a possibly deadly infection.

One place to find staph is in the nose. But the researchers found that 70 percent of the population does not carry S. aureus.

Kim Lewis directs the Antimicrobial Discovery Center at Northeastern University in Massachusetts. He wrote a commentary about the discovery in Nature Microbiology.

"So if you have lugdunin in your nose, chances are you are not going to be carrying staph aureus. So that was the initial finding of that study."

Just like animals in the wild, bacteria in our bodies compete for survival. The bacterium Staphylococcus lugdunensis fights off S. aureus.

But it gets even more interesting. Scientists found that about one third of the population has S. aureus in their nose. But almost no one with the S. lugdunensis bacterium had any sign of the possibly harmful staph infection. A few people had neither bacterium in their noses.

Lewis says there is a simple reason why researchers are looking high and low for new antibacterial drugs.

"We want to stay alive. That's the short answer to that question. Pathogens have been acquiring resistance and that has been spreading. And now pathogens are gaining the upper hand. So we need to get back in the game and figure out other ways to discover new antibiotics."

He notes that antibiotics, many of which are still in use today, were discovered during the early to middle of the 20th century. It is a period known as the Golden Age of Antibiotics. These drugs were made from compounds found in soil, a good place to find microorganisms. So that is where Lewis' Antimicrobial Discovery Center comes in.

Lewis helped create a new method to look for microorganisms that can be made into antibiotics.

Last year, Lewis and other researchers discovered the drug teixobactin. It is an antibiotic that kills a number of bacterium, including Staphylococcus aureus, by destroying their cell walls. 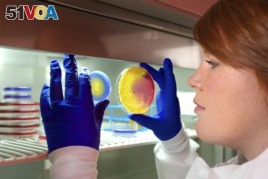 But when researchers attacked the cell walls, they found no resistance to antibiotics in the animals they studied.

This new research means the human body itself might be the source of the new drugs to keep us healthy.

Jessica Berman reported on this story for VOANews. Anne Ball adapted her report for Learning English. George Grow was the editor.

bacterium – n. any one of a group of small living things that often cause disease

microorganism – n. an extremely small living thing that can only be seen with a microscope

cultivable – adj. relating to something that can be grown