Update Required To play the media you will need to either update your browser to a recent version or update your Flash plugin.
By Anna Matteo
10 June 2020


In the United States, public television stations are launching a new show for children in June. The PBS Kids' cartoon series is called Hero Elementary. It stars a group of young superheroes.

The show is set inside an elementary school, also called a grade school. In the United States, children from about age four to age 11 go to such a school.

The superheroes are four grade school students. They must learn how to use their superpowers as best they can.

One girl, Lucita Sky, can fly, but she is afraid of high places. Another girl, Sara Snap, has the power to make herself appear anywhere immediately or in a snap. That, by the way, is superhero language for "teleport."

In addition to his cool gadgets, there is something else about AJ. He has a condition called Autism Spectrum Disorder. It affects his ability to communicate and interact with other people.

Autism presents itself on different levels – from severe to high-performing. So, when we say someone is "on the spectrum," we mean they have some level of autism.

AJ Gadgets is on the high-performing end of the spectrum. Some of his behavior is common to the autistic experience. For example, he does not like loud noises or wearing wet clothes. And he likes some things to stay the same. He likes to have his favorite things around him and hates it when they are lost.

People familiar with autism might recognize these signs of autism in the show. However, the creators are perfectly fine if others do not. The children's show purposely does not directly talk about the issue of autism -- except for two shows running later in the series.

AJ's autism just happens to be part of him. It is not the main part. As a valuable team member, he always comes to the rescue. 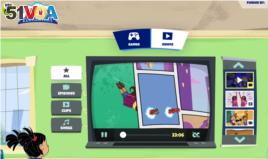 The PBS Kids' animated series "Hero Elementary" is set in a grade school where four superhero students are learning to master their special powers.

The creators of Hero Elementary -- Christine Ferraro and Carol-Lynn Parente -- talked with The Associated Press about the show.

Ferraro said there is "so much strength" in showing a child on the spectrum as just one of the team. Ferraro said AJ is just part of the group. "And that's something that we don't see a lot on television," she added. "And that's why we thought it was really important."

The U.S. Centers for Disease Control and Prevention reports that in 2016, one in 54 children were diagnosed with Autism Spectrum Disorder by age 8. In 2014, the estimate was 1 in every 59 children.

Linda Simensky works for PBS Kids. She said she likes the idea of AJ's inclusion. This means that a child on the autism spectrum is included in the team and treated just like the other children.

Creators Ferraro and Parente have worked for many years with the children's TV series "Sesame Street." In 2015, that show introduced Julia, a 4-year-old girl with autism.

However, when creating "Hero Elementary," Ferraro and Parente did not plan on having a child with autism as one of the superheroes. They said it just happened naturally.

The PBS Kids series also has a teacher, Mr. Sparks. He helps the children use their own problem-solving skills such as observing, investigating, testing and predicting. He also teaches an important life lesson: If at first you don't succeed, try – try again. And often the school-age superheroes do not succeed!

Simensky says she also likes this part of the show – children learning to solve their own problems. She said she sees too many shows where an adult solves the problems.

On the TV series, team members learn to help themselves and each other. AJ's teammates are aware of his needs. In one show, the team searches for his lost backpack. The show's creators said they hope this shows children the importance of understanding others and normalize the idea that all kids are different.

Parente said the show demonstrates understanding the different needs of a friend – whether it is autism or something else.

Mark Kennedy reported this story for The Associated Press. Anna Matteo adapted it for VOA Learning English. George Grow was the editor.

cartoon – n. a movie or television program made by photographing a series of drawings

in a snap – phrase. done, made, or carried through suddenly or without thinking

bubble – n. a tiny, round ball of air or gas inside a liquid

diagnose – v. to recognize (something, such as a disease) by signs and symptoms

introduce – v. to make (someone) known to someone else by name

backpack – n. chiefly US : a bag for carrying things that has two shoulder straps and is carried on the back