Update Required To play the media you will need to either update your browser to a recent version or update your Flash plugin.
By Phil Dierking
17 June, 2017

China used to be called the "kingdom of bicycles," but since then, cars have taken over the country. Now, new apps that help people register and find bikes are being used more and more across cities like Beijing.

Because of traffic jams, it can be difficult to travel across major Chinese cities. Even going a few kilometers can take up to an hour.

Cheng Li started using bike share services about six months ago. He said now he is using a car less and the metro more.

"After I get off the metro, I usually have to walk another kilometer or two, so I'll grab a bike share and go. It is less stressful."

For many, the best part about cycling is how easy it is to do. Beijing has had a government-run bike share program for a long time. However, many of its bike share stations were not placed in convenient places. Now, it is easy to find a bike, and to register for the program with a smartphone.

For Zhang Jian, the bike share revolution is nostalgic.

"Now, when we're riding home from work, especially in the evening, when it's not as rushed, it feels like we're reliving the past," Zhang said.

Flooding the streets with bikes

However, there is now a lot of competition among bike share providers because of their popularity. Some providers are trying to flood the streets with bikes to be more visible. Sometimes there are so many bikes that they completely block the sidewalks.

This has become a problem for city governments. It is not uncommon for bike users to leave bikes in the middle of the street or on the sidewalk. This blocks cars and people in already crowded cities.

In Beijing's southern district of Daxing, officials have been trying to fix the problem by seizing illegally parked bikes.

VOA spoke to a woman who said, "Bike sharing is really convenient, but no one is taking care of the problem of illegally parked bikes." Behind her were several thousand seized bikes. 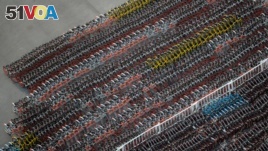 Impounded bicycles from the bike-sharing schemes Mobike and Ofo are seen in Shanghai, China.

She added, "Since the Lunar New Year, the number of bikes has been growing rapidly. At least 10,000 bikes have been added to the streets (of Daxing) since then and we've collected about a third of that total."

China's two biggest bike share operators are Ofo and Mobike. At present, they have already deployed more than three million bikes in cities across China. And the numbers continue to grow.

Mobike aims to expand to 100 cities in China and around the world by the end of this year.

Some people are trying to fix the problem of illegally parked bikes themselves.

Gao Xiaochao calls himself a ‘bike share hunter.' He is a regular citizen who finds and reports stolen and damaged bikes that users park illegally. With some bike share apps, riders can report illegally parked bikes or problems with the bicycles they have.

"Bike hunting is like a game, a hobby, a way to get some exercise. It's like a new way of living," Gao said. "Sometimes, I spend two to three hours looking for illegally parked bikes and it's just like talking a walk."

Many people in China feel that bike shares are helping the county's transportation problems and polluted air. However, they also hope companies will do more to improve their service and avoid flooding the streets with bikes.

­­­­­­­­­­­­This story was originally written by Bill Ide for VOA News. Phil Dierking adapted it for VOA Learning English. Mario Ritter was the editor.

Do you use a bike share? Do you think they are good for a city? We want to hear from you. Write to us in the Comments Section or on 51VOA.COM.

convenient - adj. allowing you to do something easily or without trouble

traffic jams - n. a line of road traffic at or near a standstill because of road construction, an accident, or heavy congestion.

nostalgic - adj. when something causes you pleasure and sadness by remembering something from the past and wishing that you could experience it again

rapidly - adj. happening in a short amount of time