Update Required To play the media you will need to either update your browser to a recent version or update your Flash plugin.
By Hai Do
04 September, 2018

Woodward, along with reporter Carl Bernstein, helped uncover the Watergate scandal that led to the resignation of President Richard Nixon.

The Post published sections of reporter Robert Woodward's book on Tuesday. It is called "Fear: Trump in the White House." It examines Trump's first 18 months in office.

The book will go on sale September 11. It is already among the top-selling books on Amazon. 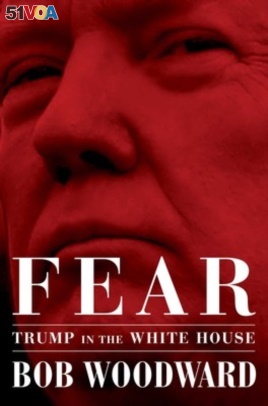 The cover of the book, "Fear," by Bob Woodward

"Fear" describes how Trump's aides reportedly steal papers from the president's desk to keep him from taking quick, thoughtless actions.

The book quotes Chief of Staff John Kelly as saying, "He's an idiot. It's pointless to try to convince him of anything. He's gone off the rails. We're in Crazytown. I don't even know why any of us are here. This is the worst job I've ever had."

Kelly denied the reported quote in a statement Tuesday. He said, "The idea I ever called the President an idiot is not true."

Trump later tweeted, "The Woodward book has already been refuted and discredited by General (Secretary of Defense) James Mattis and General (Chief of Staff) John Kelly. Their quotes were made up frauds, a con on the public. Likewise other stories and quotes. Woodward is a Dem [Democratic] operative? Notice timing?"

In the book, Woodward writes that Trump's former lawyer, John Dowd, feared the president might perjure himself if he answered questions for special counsel Robert Mueller's investigation into Russian election interference.

The book describes how Dowd reportedly set up a practice session for Trump and told the president, "Don't testify. It's either that or an orange jumpsuit."

In a statement on Tuesday, Dowd denied saying that, adding that there was "no so-called ‘practice session.'"

The book says Secretary of Defense Jim Mattis compared the president's behavior to that of a "fifth- or sixth-grader."

Mattis released a statement on the book Tuesday night. He said he never said about the president the things the book claims he said, nor did anyone in his presence.

The book also claims that Gary Cohn, the former director of the National Economic Council, said he took papers from Trump's desk to prevent him from withdrawing from the North American Free Trade Agreement.

The Washington Post says Woodward's book was written from hundreds of hours of interviews on "deep background," meaning the information could be used without saying who provided it. The book reportedly also used meeting notes, personal notes and government documents.

Also on Tuesday, the Washington Post published audio of Trump calling Woodward last month. In the recording, Trump says he was surprised to hear about the book. Woodward tells Trump that he had contacted many officials in an attempt to interview Trump.

Hai Do adapted this story for Learning English based on reports by the Associated Press, with additional materials from the Washington Post. Ashley Thompson was the editor.

quote - v. to write or say the exact words of (someone)

aide - n. a person whose job is to assist someone

off the rails - expression. in an unusual way or manner

refute - v. to prove that (something) is not true

con - n. a dishonest trick that is done to get someone's money

testify - v. to talk and answer questions about something especially in a court of law while formally promising that what you are saying is true