Update Required To play the media you will need to either update your browser to a recent version or update your Flash plugin.
By Mario Ritter Jr.
24 February 2020


A World Health Organization (WHO) official is crediting China with controlling the new coronavirus in Wuhan, the city where the virus was first identified.

The head of a WHO team in China, Bruce Aylward, said Monday that Chinese actions had probably prevented hundreds of thousands of coronavirus cases.

He spoke as Italy, South Korea and Iran each reported sharp increases in cases.

Italy's government reported Monday that a seventh person infected with the virus died in the country. Italy has Europe's largest number of reported infections. More than 220 cases have been reported nationwide. 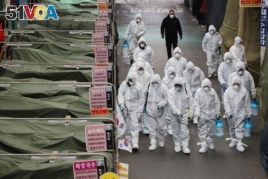 Market workers wearing protective gear spray disinfectant at a market in the southeastern city of Daegu on February 23, 2020 as a preventive measure after the COVID-19 coronavirus outbreak.

To guard against the disease, Italian officials have set up roadblocks, cancelled football games and closed theaters, including the famous La Scala opera house. In northern Italy, officials closed schools, universities and museums for at least one week. In addition, 10 towns in the Lombardy area, near the city of Milan, have been placed under what the Reuters news agency calls an "effective quarantine."

The total number of cases worldwide is thought to be greater than 79,000. Groups of infected people have emerged in a number of places that had not reported cases earlier.

WHO chief Tedros Adhanom Ghebreyesus said that, "The past few weeks [have] demonstrated just how quickly a new virus can spread around the world and cause widespread fear and disruption."

Iran's semi-official news agency ILNA news reported that 50 people had died from COVID-19. That is the name for the disease that results from the coronavirus. However, Iran's Health Ministry disputes the report, saying the number of people who have died from the disease remains at 12.

In South Korea, the government said it has taken "powerful steps" to limit the crisis. President Moon Jae-in has placed the country under its highest warning level.

Health officials are concerned about people in the city of Daegu, where police searched for members of a religious group. More than half of the country's coronavirus cases have been linked to the group.

Health workers said they planned to test everyone in Daegu who showed signs of a cold.

South Korea's vice health minister Kim Gang-lip said, "If we fail to effectively prevent the spread of the virus into the local communities, there would be a large possibility (that the cases) spread nationwide."

On Monday, the National Assembly in Seoul was temporarily closed so workers could disinfect the building.

In Japan, health officials have reported more than 800 coronavirus cases. Many of them involved passengers on the quarantined cruise ship Diamond Princess.

China, where the virus started, continues to report hundreds of new cases, yet the numbers are smaller than earlier in the month.

The disease has infected not only civilians but also health workers. Most of those cases are in the city of Wuhan. China largely banned travel into and out of Wuhan and several other cities in Hubei Province in an effort to slow the disease.

The head of the WHO delegation to China, Bruce Aylward, credited Chinese actions for controlling the spread of the virus. He urged other nations to learn the lesson of acting quickly.

"The world is in your debt," Aylward said of the people in Wuhan.

In addition, China said it plans to postpone the meetings of the National People's Congress in an effort to avoid spreading the disease.

The news about coronavirus infections was blamed for sharp drops in the value of stock shares on financial markets in Europe and the United States. Leading measures of European stock prices dropped by three percent or more by the close of business on Monday.

Mario Ritter Jr. adapted the story from Reports by the Associated Press and Reuters news agency for VOA Learning English. George Grow was the editor.

museum – n. a center or organization set up for the care and study of objects of lasting interest or value

quarantined –adj. being kept apart from others in order to prevent a disease from spreading

disruption –n. to cause something to be unable to continue in a normal way

semi-official – adj. have some or limited official standing

disinfect –n. to clean in an effort to remove harmful germs such as viruses and bacteria

cruise – adj. of or related to sailing to a series of ports