Update Required To play the media you will need to either update your browser to a recent version or update your Flash plugin.
By John Russell
13 January 2020


The latest diet trend in America is also an ancient human activity. The activity is fasting, or not eating food for a set amount of time.

Social media apps and Facebook groups are appearing for people who do "intermittent fasting," or fasting on a part-time basis. 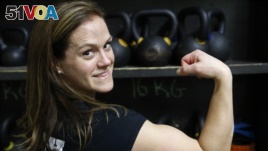 Melissa Breaux Bankston, a CrossFit athletic trainer at CrossFit Algiers in New Orleans, poses for a portrait at the gym Monday, Dec. 23, 2019. She participates in an intermittent fasting diet. (AP Photo/Gerald Herbert)

Like other diets, intermittent fasting helps you lose weight by setting limits on eating. But instead of limiting what you eat, it limits when you eat.

One of the more popular approaches to intermittent fasting is called "time-restricted feeding." It is not as difficult as some of the other approaches, since the fasting period can include the time you are sleeping.

The basic idea of time-restricted feeding is to limit eating to an eight-hour period. You then fast during the day's other 16 hours.

Many people make the eating period shorter or longer. Some eat just one meal a day.

In other approaches, people fast several days during a week. On fasting days, some people may permit themselves around 600 calories.

Whatever the approach, people are not supposed to overeat when they stop fasting.

Melissa Breaux Bankston is a Crossfit instructor in New Orleans, Louisiana. She tried intermittent fasting as a way to reduce her snacking. "I wanted to limit the amount of time that I was eating," she said.

Studies on the potential health benefits of intermittent fasting are still limited, including for its effectiveness with weight loss.

For now, limited research suggests it may not be any better for weight loss than reducing calorie intake over the long term.

"It's really another way of fooling your body into eating less calories," said Krista Varady, who studies intermittent fasting at the University of Illinois at Chicago.

Is intermittent fasting right for you?

Some health experts say intermittent fasting might be too difficult for many people. They point to a study of 100 people where those placed in a fasting group lost about the same amount of weight as those on diets that restricted calories. The fasting group had a dropout rate of 38 percent, compared with 29 percent for the caloric-restriction diet group.

But intermittent fasting may be easier for people who already skip meals when they are too busy, said Varady.

Candice Choi reported on this story for the Associated Press. John Russell adapted it for Learning English. Mario Ritter, Jr. was the editor.

trend – n. something that is currently popular or fashionable

hype – v. informal to talk or write about (something or someone) in a way that is intended to make people excited or interested

skip – v. to not do (something that is usual or expected)

disorder – n. medical : a physical or mental condition that is not normal or healthy