Update Required To play the media you will need to either update your browser to a recent version or update your Flash plugin.
By Pete Musto
11 February, 2018

They examined from above an area of dense jungle in Guatemala's Peten region. They discovered thousands of houses, defense works and pyramids.

They also found industrial-sized agricultural fields and canals that provided water for farms. The findings suggest that millions more people lived in the area than researchers had long believed. 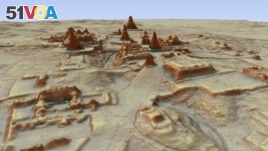 A team of archaeologists from Europe, the United States and Guatemala announced their findings earlier this month. The team worked with Guatemala's Maya Heritage and Nature Foundation.

Their study says that around 10 million people may have once lived within the area known as the "Maya Lowlands."

"That is two to three times more than people were saying there were," said Marello A Canuto in an interview with the Associated Press. He is an anthropology professor at Tulane University in New Orleans, Louisiana.

The researchers used a mapping method called Light Detection and Ranging, or LiDAR. A device sends laser light from high above, which hits the ground and then returns back to the device. The technology can reveal shapes and structures hidden by dense trees and plants.

The recent images revealed that the Maya changed the natural environment much more than researchers had thought. In some areas, they developed 95 percent of the available land.

Francisco Estrada-Belli is a Research Assistant Professor at Tulane University. He said the Maya's agricultural methods were "much more intensive and therefore sustainable than we thought."

The 2,100 square kilometers of mapping greatly expands the area that the Maya were known to have occupied. Their culture flourished between about 1,000 BC and 900 AD. Maya descendants still live across Central America and in parts of Mexico.

Thomas Garrison is an Assistant Professor of Anthropology at Ithaca College in New York. He worked on the project and is an expert on the city of El Zotz, near Guatemala's Tikal.

He said he went to the area earlier this year with the LiDAR information to look for one of the roads that was revealed in the findings.

"I found it," Garrison said. "But if I had not had the LiDAR and known...that's what it was, I would have walked right over it, because of how dense the jungle is."

Garrison said that the fields, roads and structures built by some other ancient cultures got destroyed by later generations of farming.

But in this case, the jungle grew over the abandoned Maya fields and structures. This both hid them and protected them from damage.

Pete Musto adapted this story for VOA Learning English using reporting from the Associated Press. Ashley Thompson was the editor. We want to hear from you.

What other new discoveries do you think the use of LiDAR technology might lead to? Write to us in the Comments Section or on 51VOA.COM.

aerial – adj. taken or seen from an airplane

civilization – n. a particular well-organized and developed group of people in a given country, area, or time, thought of especially as an organized community

pyramid(s) – n. a very large structure that has a square base and four triangular sides which form a point at the top

archaeologist(s) – n. a person who studies the science that deals with past human life and activities by studying the bones, buildings and tools of ancient people

descendant(s) – n. someone who is related to a person or group of people who lived in the past

plaza(s) – n. an open public area that is usually near city buildings and that often has trees and bushes and places to sit, walk, and shop

abandoned – adj. left by the owner