These Paper Drones Can Make Deliveries, then Disappear

Update Required To play the media you will need to either update your browser to a recent version or update your Flash plugin.
By Bryan Lynn
28 February, 2017


An American company has built a new drone that could improve the efficiency of deliveries.

The drone is very different from other unmanned aircraft. It is made almost completely out of cardboard and has no motor. It can be packed with materials and sealed up with tape.

Because the drones do not have a motor, they are designed to be dropped from airplanes. Hundreds of drones could be launched at once. Then they could be automatically guided to where they are supposed to go.

The company says these drones could then complete deliveries to different places over an area covering hundreds of kilometers.

The drones look like bigger versions of the paper airplanes we used to make as kids. But this light flyer is not a toy. It is aerodynamically designed and equipped with a small computer, a battery and sensors to guide it to the ground.

The drones are being developed by Otherlab – a technology research company in San Francisco, California. It calls the drone a "Sky Machine."

The company says it can travel about 150 kilometers at speeds up to 88 kilometers an hour. Currently, it can carry materials weighing up to one kilogram, but future models are expected to carry larger loads.

One of the drone's main advantages is that it does not have a heavy motor or large battery. This allows more room for materials and makes the drone cost less to build and operate.

The Otherlab development team has called its invention the "Ikea of drones." This is because it is packaged similarly to products from the Swedish furniture maker Ikea. The drone arrives as flat pieces of pre-cut cardboard that can be quickly and easily put together. 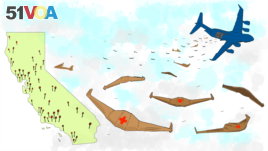 Otherlab has developed lightweight, paper drones that the company says can be dropped out of larger aircraft and then automatically guided to areas covering hundreds of kilometers. (Otherlab)

The technology that guides the drone can make it land within 10 meters of its target, according to Otherlab. Unlike other drones, even a crash landing is acceptable since the aircraft is disposable. The company says the drones can also be reused.

Once the drone completes its delivery, it can be thrown away and the cardboard material will likely decompose within a few months.

The company has received money from the U.S. Department of Defense to carry out research on the drones. The money came from the Defense Advanced Research Projects Agency.

The agency is attempting to find the best delivery vehicles that can disappear after their missions are complete. The U.S. military has a need for delivery drones. But it wants to simplify and lower the cost of using them. Otherlab's Sky Machines are an attempt to fill that need.

Military drones can also be stolen and studied by others if found after use. Before they can truly vanish, the electronic materials inside must also somehow disappear. Researchers are still working on ways to get the technology itself to self-destruct.

We want to hear from you. What do you think about these paper drones? Write to us in the Comments section, and visit 51VOA.COM.

delivery – n. act of taking something from one place to another

tape – n. material that is sticky on one side to hold things together

aerodynamically – adv. relating to the study of how objects move through the air

disposable – adj. intended to be used once, then thrown away

decompose – v. cause something to be slowly broken down by natural processes