New Drug Slows Alzheimer's, But Not a Cure

Update Required To play the media you will need to either update your browser to a recent version or update your Flash plugin.
By Hai Do
09 January 2023

The Alzheimer's Association describes Alzheimer's as a brain disease that causes a decline in memory, thinking and reasoning skills.

One of the most common signs of Alzheimer's disease is forgetting recently learned information or dates and events. People with the disease have difficulty doing things that they did before. Some may struggle with joining or following a discussion. 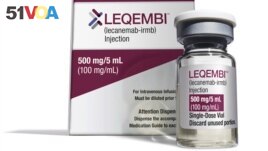 This Dec. 21, 2022, image provided by Eisai in January 2023, shows vials and packaging for their medication called Leqembi. The U.S. Food and Drug Administration granted the approval Friday for patients in the early stages of Alzheimer's. (Eisai via AP)

The newly approved Leqembi is a long-needed new treatment for the disease.

But experts warn that the drug is not a cure.

Dr. Joy Snider is a brain doctor at Washington University in St. Louis, Missouri. She said, "This drug is not a cure. It doesn't stop people from getting worse, but it does measurably slow the progression of the disease." She added, "That might mean someone could have an extra six months to a year of being able to drive."

The U.S. Food and Drug Administration (FDA) approved the drug through a speedier-than-usual process. The process permits drugs to be launched based on early results.

The drug is only for early-stage patients and requires an injection by healthcare workers every two weeks. It is not yet clear how much the drug can help people with the disease. There are also concerns about its safety.

Still, "it's a landmark," said Dr. Richard Hodes, director of the National Institute on Aging. "It's not enough, but it's encouraging that there's something we can do," he added.

How does the new drug work?

Leqembi is made by Japan's Eisai and its U.S. partner Biogen. The drug is designed to target and clear away beta-amyloid, a substance that builds up in the brain and leads to Alzheimer's.

Dr. Sam Gandy is an Alzheimer's expert at New York's Mount Sinai Hospital. He told the Associated Press that Leqembi targets a slightly different form of amyloid than other drugs that have sought to treat the disease. That might explain why Leqembi proved to be successful while many other experimental drugs have failed.

In 2021, U.S. health officials approved a similar drug named Aduhelm, even though studies never proved it really helped patients. The move led to criticism after a congressional investigation.

In Eisai's 18-month study of nearly 1,800 people, Leqembi appeared to delay early-stage patients from getting worse by about five months.

The study measured people on an 18-point scale that follows their mental and functional abilities. People who got the drug still worsened but not as quickly as those given an inactive substance. The difference was nearly half a point on that scale by the study's end.

Experts are divided over how meaningful the difference is.

Dr. Matthew Schrag is a neurology researcher at Vanderbilt University in Tennessee. He said, "Most patients won't notice the difference."

Schrag and some other researchers believe a meaningful improvement would require at least a difference of one full point on the 18-point scale.

Others say slowing the disease early on - when people still function well - is important.

Hodes, the director of the National Institute of Aging, said, "Several months with better cognition, what's that worth to you?"

He added, "I think there you can get a strong argument: If I can interact with my family, be independent for months ... that's a very meaningful outcome."

What are the risks?

The likely reason for this is that amyloid plaques usually form around nerve cells in the brain but sometimes they get inside blood vessels, too.

Several Leqembi users died while taking the drug, including two people who were on blood-thinning medications. Eisai has said its Alzheimer's drug did not cause their deaths.

Patients also may experience reactions from the drug that could include high body temperature, an upset stomach and changes in blood pressure.

Eisai says the drug should be available by January 23. A year's worth of treatment is expected to cost $26,500. If insurance companies cover the drug, however, most people will not have to pay anywhere near that much.

Hai Do adapted this story for Learning English based on reporting from the Associated Press and other sources.

decline - n. the process of become worse in condition

encourage - v. to make something more likely to happen

scale - n. a range of numbers that is used to show size, quality or strength

cognition - n. the activity of thinking, understanding, learning and remembering

interact - v. to talk or do things with other people

outcome - n. something that happens as a result of activity or progress

swelling - n. an area on someone body's that is larger than normal because of an illness or injury

plaque - n. a change in brain tissue that happens in Alzheimer's disease

stroke - n. a serious illness caused when a blood vessel in your brain suddenly breaks or is blocked