Update Required To play the media you will need to either update your browser to a recent version or update your Flash plugin.
By John Russell
07 April, 2019


At an animal hospital in the Northeast United States, a biologist takes blood from a sick loggerhead sea turtle named Honey Bun.

This is one of the first steps scientists must take before treating and rehabilitating the turtle so that it can be returned into the wild.

Cape Cod, in the state of Massachusetts, may have some of the largest numbers of turtle strandings in the world.

The number of turtles that became trapped on Cape Cod beaches has risen over the past 10 years. That information comes from the Mass Audubon's Wellfleet Bay Wildlife Sanctuary.

This year, volunteers found 829 turtles washed up on the sand. About half of them were dead, including some that were frozen solid. That number is nearly twice what workers found in 2016 and nearly 10 times more than 2008.

Some experts think the number of washed up turtles is related to climate change.

A paper published in PLOS ONE notes that there were more strandings of Kemp's ridley sea turtles in years with warmer sea-surface temperatures. It added that of the threats to turtle populations, "climate change may present the broadest threat for sea turtle conservation."

Over the past 10 years, many turtles have been moving north from the Gulf of Mexico into the warming waters of the Gulf of Maine. There, they feed on mussels, crabs and other sea creatures.

Cape Cod extends into the Atlantic Ocean, serving as a kind of trap for turtles. When the waters cool there, the animals start to have health problems, like developing pneumonia. They have problems moving and eating.

Bob Prescott is the director of Wellfleet Bay Wildlife Sanctuary and helped to prepare the PLOS ONE paper. He notes that the sea turtles "know how to leave, but the Cape is like a trap – a hook within a hook."

If the turtles survive, it can take months before they are fully recovered. Adam Kennedy is a biologist at New England Aquarium's sea turtle hospital in Quincy, Massachusetts. He says that when the turtles arrive at the hospital "they look like they are dead, especially in December."

Jeffrey Seminoff heads the Marine Turtle Ecology and Assessment Program at the National Oceanic and Atmospheric Administration's National Marine Fisheries Service. He believes that the high number of strandings "probably results from the simple fact that there's more turtles." 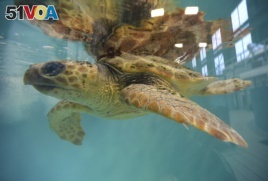 In this Thursday, Dec. 6, 2012 photo, a rescued loggerhead turtle swims under its reflection in a tank at the New England Aquarium's Animal Care Center in Quincy, Mass. (AP Photo/Elise Amendola)

Seminoff said that the recovery of the turtle population and "success of conservation efforts at the nesting beaches" could explain the higher number of turtle strandings.

Kennedy, the biologist, said that he has mixed feelings when the turtles are released back into the wild. "It's bittersweet, because you spend so much time with them but ultimately every one of these guys getting back to the ocean helps the population."

Recently, Honey Bun – the turtle we met at the beginning of our report – and other turtles were taken to Florida. They were released into the water.

Kelly Shaffer is with National Aquarium Baltimore, which worked with four other groups to organize the turtles' release. She noted that she feels a sense of "joy and accomplishment" at "being able to put them back out there."

Michael Casey reported on this story for the Associated Press. John Russell adapted it for VOA Learning English. George Grow was the editor.

rehabilitate – v. to bring something back to a normal, healthy condition after a disease, injury or drug problem

strand – v. to leave a person or animal in a place without a way to escape

conservation – n. careful protection of something

pneumonia – n. a disease that affects the lungs and makes it difficult to breathe

hook – n. a curved device used for catching or holding something

nest – n. the place where an animal lays its eggs and takes care of its young