Update Required To play the media you will need to either update your browser to a recent version or update your Flash plugin.
By Dan Novak
08 November 2022


Cambridge University Press and Assessment is partnering with the Organization for Economic Cooperation and Development (OECD) on a new English language assessment. The goal of the new assessment is to improve understanding of how English is taught and learned as a foreign language.

The assessment will be a part of the OECD's Program for International Student Assessment, called PISA. PISA is a worldwide study every three years that measures student performance in math, science and reading in the native language. About 80 countries take part in the study. 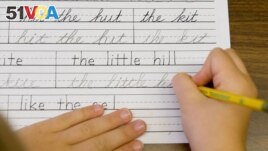 "It's a fact that English is the language of communication of study, of work, spoken by billions of people," Hanan Khalifa told VOA. Khalifa is a language learning and teaching expert with Cambridge, and one of the leading experts on the PISA foreign language assessment. "So it wasn't surprising to use English as a foreign language to start with," she said.

The PISA assessment administered "all over the world with participating countries gives us really, really rich data," Khalifa said. Until now there has not been a "reliable ... data source about the levels of the abilities of people who would speak English."

She said the data will help countries make decisions about how to use resources. Without good data it can be hard to know whether countries should center their efforts on developing study programs, training teachers, or introducing students to the language earlier, she said.

The PISA study is only given out to 15-year-old students who attend the school system. The test will center on assessing real-world, everyday English communication.

The test will be entirely online and through a computer. Students will be assessed based on their English language ability. Students will speak into microphones for the spoken parts of the test.

OECD piloted the assessment in five countries in 2021, and Khalifa said it was a success.

Catalina Covacevich is with OECD and was involved with the pilot program.

She said in a statement that "we were concerned that students with low levels of speaking skills may have found the pilot stressful, but one school enjoyed it so much, they clapped after the speaking assessment."

Khalifa said the test is not meant to trick students or be overly difficult.

"We try to minimize the anxiety as much as possible," she said.

But the countries involved take the results seriously. Khalifa said that countries that have been helped by PISA have changed their education policies. Some countries have decided to hire more teachers or introduce foreign languages at a younger age, she said.

"And that is one of the key reasons why we partnered with OECD," Khalifa said. "It is about that influence [of PISA]."

assessment — n. the act of making a judgment about something

administer — v. to manage the operation of

participate — v. to be involved with others in doing something

reliable — adj. able to be trusted to do or provide what is needed

pilot — adj. done as a test to see if a larger program, study, etc., should be done

clap — v. to hit the palms of your hands together usually more than once

minimize — v. to make something bad or not wanted as small as possible

influence — n. the power to change or affect someone or something