Update Required To play the media you will need to either update your browser to a recent version or update your Flash plugin.
By Bryan Lynn
06 November 2022


Researchers say they have discovered new evidence that Mars once had a large northern ocean. The finding adds to existing evidence that ancient Mars had the right conditions to possibly support some form of life.

Today, Mars has a cold, desert climate. Any water is believed to be in the form of ice because of the planet's extremely cold temperatures. But there is a rich amount of evidence suggesting that rivers, lakes and even oceans once existed on Mars.

For example, a 2015 study by the American space agency NASA suggested that 4.3 billion years ago, Mars likely had an ocean that covered nearly half of Mars' northern hemisphere. 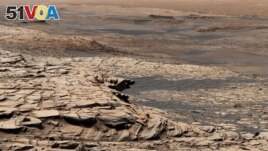 This photo, compiled from 28 images, shows the view from NASA's Curiosity Mars rover on April 9, 2020. It shows the landscape of the Stimson sandstone formation in Gale Crater. (Photo Credit: NASA/JPL-Caltech/MSSS)

Another NASA-supported study, published in January, estimated that three billion years ago, the climate in much of the planet's northern hemisphere was very similar to present day Earth. The study noted that at the time, Mars likely had a much thicker atmosphere than today and had an active, northern ocean.

The team collected data from satellite images of Mars. They then combined these images to create topography maps of the planet's northern hemisphere.

Using these maps, the researchers said they were able to piece together evidence of shorelines that sat at the edge of a huge body of water about three-and-a-half billion years ago.

The scientists recently published their findings in the Journal of Geophysical Research: Planets.

The team said it used software developed by the United States Geological Survey to map data collected by spacecraft operated by NASA. The research uncovered more than 6,500 kilometers of ridges that are believed to have been formed by flowing water.

Benjamin Cardenas was a co-writer of the study. He is a professor of geosciences at Penn State University in Pennsylvania. He said in a statement the area of Mars studied – now known as Aeolis Dorsa – contains "the densest collection" of water-formed ridges on the planet.

Cardenas said the study's findings demonstrate the possible ocean in that area of Mars was very active and interesting. "It was dynamic. The sea level rose significantly," he said. "Rocks were being deposited along its basins at a fast rate. There was a lot of change happening here."

Cardenas added that areas on our own planet containing water-formed ridges and sediment provide researchers with much useful information about an area's climate and life forms. "If scientists want to find a record of life on Mars, an ocean as big as the one that once covered Aeolis Dorsa would be the most logical place to start," he said.

The team noted that the major goal of NASA's Mars explorer, Curiosity, is to look for signs of ancient life on the planet. Currently, Curiosity is operating within the planet's Gale Crater, which is in the southern hemisphere of Mars. In the past, researchers have also found evidence of past water systems around Gale Crater.

In addition to providing more evidence of a large ocean, Cardenas suggested the new study also provides useful information on Mars' ancient climate and developmental history. "Based on these findings, we know there had to have been a period when it was warm enough and the atmosphere was thick enough to support this much liquid water at one time," he said.

Bryan Lynn wrote this story for VOA Learning English, based on reports from Penn State, NASA the Journal of Geophysical Research: Planets and Arizona State University.

topography – n. the shape and other physical characteristics of a piece of land

shoreline – n. the edge of a sea, lake or wide river

erode – v. to rub away over time

sediment – n. the material that sinks to the bottom of a liquid

deposit – v. to leave something somewhere

logical – adj. reasonable and based on good judgment