Update Required To play the media you will need to either update your browser to a recent version or update your Flash plugin.
By Anna Matteo
26 November, 2018

Most of us know that physical activity leads to better health. That is nothing new.

But for the first time in 10 years, the United States government has changed its guidance on how much exercise people need to stay healthy and when they should start.

Brett Giroir is Assistant Secretary for Health at the U.S. Department of Health and Human Services. In a video, he spoke with the Associated Press about the new guidelines.

Dr. Giroir says he is excited about the new guidelines. He adds that getting or attaining the health benefits from exercise may be easier than earlier thought.

That is good news for people in the U.S. who may need to lose weight.

The U.S. Centers for Disease Control and Prevention reports that in 2016 about 93 million adults nationwide were overweight or considered obese. Its website notes that obesity rates for both adults and children have been rising since 1999.

In this 2014 photo, Lee Santamaria, front, teaches children during a soccer camp held in Miami, Florida.

For children and teens

The new federal guidance states that children as young as 3-years-old need to be physically active. Earlier guidelines used to begin at age 6.

Dr. Girior says that the most important time for children to begin exercising is between the ages of 3 and 5. He notes that boys and girls in this age group need at least three hours of activity every day.

"That was not present in our previous guidelines. But essentially, those recommendations are that children in the 3- to 5-year-old age group really require about three hours of active activities per day. That could be light activities, moderate activities, or even vigorous activities. This is the kind of play that children normally engage in."

Doctors say it is important to start young. They add that from birth to age 5, a child's brain develops more than at any other time in life. These developments have a lasting effect on a child's ability to learn and to succeed in school and in life.

Also, Giroir says that children who start exercising at a young age are more likely to establish healthy behaviors they will continue into adulthood.

Dr. Giroir does not suggest putting your 5-year-old on a "treadmill" or other exercise equipment. He said, simply giving a child the time and space to play actively as they normally would is enough.

The new guidelines say that children ages 6 through 17 get at least one hour of moderate to vigorous activity a day. Most of this activity should be aerobic exercise, such as biking, swimming or running. Aerobic activity can strengthen the heart and lungs by making them work hard for several minutes or more. 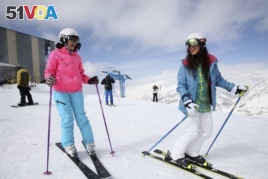 If you are lucky to live near a mountain, skiing is a great exercise. Here, Iranian skiers laugh at a ski resort north of the capital Tehran, Iran, March 2018.

Exercise should also include muscle- and bone-strengthening activities, such as climbing trees or playground equipment and playing sports. Experts suggest that children get this kind of exercise at least three times a week.

For adults, the suggested length of time for exercise remains the same.

"So for adults, the guidelines recommend 150 minutes per week of moderate to vigorous physical activity. That could be brisk walking; it could mowing the lawn; it could be gardening; it could be dancing ... any kind of activity that gets your heart rate up and gets you exercising moderately."

The federal government has changed its guidance for the amount of aerobic exercise adults should have.

Earlier guidelines stated that aerobic activity is only effective if it lasts for at least 10 minutes.

Experts now say that even short amounts of aerobics can help. It can provide short-term health benefits, such as lowering blood pressure, reducing anxiety and improving sleep. They also think adults need at least two days of muscle-strengthening exercise like pushups or lifting weights.

However, those over age 65 should include activities that help aid balance and flexibility. Better balance means fewer falls and less chance of injury.

Sitting too much is still very bad

The new guidelines have changed nothing about the dangers of sitting too much. It is especially harmful and can even undo the benefits of exercise you may have gained.

previous – adj. going before in time or order

essentially – adv. in essence : fundamentally —used to identify or stress the basic or essential character or nature of a person or thing or to say that a description is basically true or accurate

treadmill – n. an exercise machine which has a large belt that moves around while a person walks or runs on it

recommend – v. to say that (someone or something) is good and deserves to be chosen