Update Required To play the media you will need to either update your browser to a recent version or update your Flash plugin.
By Pete Musto
30 May, 2017


A new airplane may soon be able to travel into space at more than five times the speed of sound.

DARPA is an agency in the United State Department of Defense. It creates new technology for the American military. 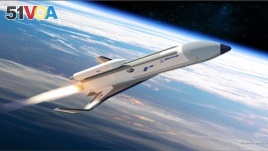 DARPA's Experimental Spaceplane (XS-1) program seeks to build and fly the first of an entirely new class of hypersonic aircraft that would break the cycle of escalating launch costs and make possible a host of critical national security options. (DARPA)

The experimental spaceplane is called the XS-1, or the ‘Phantom Express.' It would operate without a human pilot.

The goal of the project is make it easier to reach low earth orbit, between 160 and 2,000 kilometers above the surface of the Earth.

For example, the spaceplane could be used to launch a satellite very quickly. Currently, a lost military or commercial satellite might take months to replace.

Jess Sponable is the DARPA program manager. In a press release, she said DARPA was pleased with Boeing's earlier work on the project. She added the Phantom Express spaceplane would reduce the cost of space launches to one tenth of their current levels and would make them possible "on demand."

"The XS-1 would be neither a traditional airplane nor a [normal] launch vehicle, but rather a combination of the two," said Sponable.

DARPA reports that the Phantom Express will be about the size and weight of a business jet. Instead of using rockets to launch, it will use self-contained, super cold fuel.

Right before reaching outer space, the plane would launch a smaller rocket . This would be able to lift a satellite weighing up to 1,360 kilograms into low Earth orbit.

The XS-1 would then return to Earth, landing like a normal plane. DARPA said the plane could then possibly be reused "within hours."

The Phantom Express could fly as a fast as Mach 10, or ten times the speed of sound, DARPA said.

But the XS-1 is still years away from completion. DAPRA reported testing of the plane's engines on the ground is not planned to start until 2019.

This report first appeared on 51voa.com Pete Musto adapted it for Learning English. Mario Ritter was the editor.

What sorts of other new technology do you think may be coming soon? We want to hear from you. Write to us in the Comments Section or on 51VOA.COM.

aerospace – adj. related to the development of airplanes and spacecraft

commercial – adj. related to the buying or selling of goods

jet – n. a fast airplane that has one or more jet engines