New 'Ghostbusters' Film Shows the Spirit of the First

Update Required To play the media you will need to either update your browser to a recent version or update your Flash plugin.
By Caty Weaver
15 July, 2016


Forget everything you think you know about the new "Ghostbusters" movie.

Critics, movie-lovers and film industry professionals had expressed considerable worry about the remake of the movie from 1984.

There were protests on the Internet about the cast and story even before the film finished production.

The first "Ghostbusters" is a classic American film. So, the public has been sensitive about a remake. 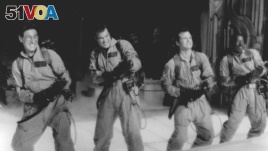 In this photo provided by Columbia Pictures via the Library of Congress, Harold Ramis, Dan Aykroyd, Bill Murray and Ernie Hudson (left to right) are shown in "Ghostbusters."

But, Ivan Reitman, the producer of the new version, says, "The movie is the only answer to the question, ‘Is the movie good, or not?'''

The 2016 film took a funny path in reaching the cast change decision.

Reitman directed the original "Ghostbusters" and produced "Ghostbuster 2," which was released in 1989. He was looking to do a third in the series. It was to feature the now-grown son of two of the original characters.

"Ghostbusters III" was expected to bring back several members of the original movie cast.

However, one star, Bill Murray, was not excited about the project. He wanted his character killed very early into the movie. Then Harold Ramis, the beloved co-star and co-writer of the original, got very sick. He died in February 2014 at the age of 69.

"It just broke all of our hearts,'' Reitman said. "There was no way to do that movie without him and with a reluctant Bill. I decided I would give up the directing and negotiated a deal to make it possible for the studio to continue this thing that we started.''

Shortly after, "Bridesmaid" director Paul Feig got involved in the project. He brought in writer Katie Dippold. Dippold had written the popular comedy movie, "The Heat," which starred Sandra Bullock and Melissa McCarthy.

"When Paul told me the four people who were on it, I was like, ‘Oh he's going for a beast fest.' All of us are comedic beasts,'' said Jones. She was a little worried about how they would all work together.

"I knew very early that we were in very good shape when I saw the four of them together,'' he said. 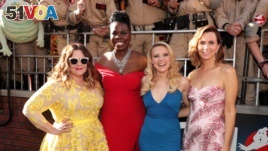 'The spirit of the movie'

And it is not. The story is its own creation about the formation of the Ghostbusters, set in the present day. Only a few scientists believe in the paranormal.

For Kristin Wiig, choosing to do the project was "an easy yes." She was happy knowing the original cast supported the production.

"It really felt like we were being blessed in such a way that we were all part of this thing together. It's kind of what the spirit of the movie is,'' Wiig said.

Harold Ramis is honored in a small part of the film. His son, Daniel Ramis, has a small role that takes place at heavy metal rock music show.

"Ghostbusters" was released in the United States on July 15. It cost around $150 million to make. Most movie critics have either praised the film or given it a neutral review.

And many have taken issue with the dislike some people have expressed about the casting of all-female ghostbusters. A headline of the review in the New York Times newspaper reads: "Our Ghostbusters Review: Girls Rule. Women Are Funny. Get Over It."

Caty Weaver adapted this report from the Associated Press. Ashley Thompson was the editor.