Update Required To play the media you will need to either update your browser to a recent version or update your Flash plugin.
By Dan Novak
24 January 2023


A recently released study says the average yearly temperature on Greenland has increased by 1.5 degree Celsius above the average for the 20th century for a 15-year period ending in 2011.

Scientists used examples of Greenland's ice to get information about temperatures from hundreds of years in the past. Until recently, Greenland's ice cores had not shown a clear sign of warming on the remotest north-central part of the island. Those findings were based on cores from 1995. Researchers involved in the recent study examined cores that were drilled in 2011. They said their work showed a rise in temperature in the previous 15 years. The German researchers published their study in Nature. 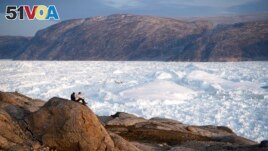 FILE - In this Aug. 16, 2019, photo, student researchers sit on top of a rock overlooking the Helheim glacier in Greenland.

"We keep on (seeing) rising temperatures between 1990s and 2011," she said. Hoerhold is a glaciologist at the Alfred Wegener Institute in Germany. "We have now a clear signature of global warming."

Scientists take years to study ice core data. Hoerhold has new cores from 2019. But she has not finished studying them. She expects the temperature rise to continue. The study said Greenland's ice sheet and glaciers have been melting.

Information from ice cores has been used to estimate temperatures in Greenland from the year 1000 to 2011. Scientific models suggest average temperatures fell a little for the first 800 years of that period. Temperatures then increase a little and then go down until a sudden increase from the 1990s until 2011.

The increase in temperatures after 1995 was much larger than pre-industrial times before the mid-19th century. There is an "almost zero" chance that it is anything but human-caused climate change, Hoerhold said.

Hoerhold said Greenland's natural weather changes in the past had hidden human-caused climate change. But, as of about 25 years ago, the warming became too big to be hidden, she said.

Scientists say past data shows that Greenland is not warming as fast as the rest of the Arctic, the extreme northern part of the world. Some scientists suggest the temperature of the Arctic is now increasing at a rate four times faster than the average world temperature is.

Hoerhold and scientists not involved in the research said the new warming data is bad because Greenland's ice is melting. The study ends with data from 2011. Hoerhold said that, in the following year, a lot of ice melted across Greenland, and the island's ice loss has been high since then.

Jason Box is a scientist with the Danish Meteorological Institute. He said, "We should be very concerned about North Greenland warming because that region has a dozen sleeping giants in the form of wide tidewater glaciers and an ice stream." As temperatures continue to get warmer, more ice will melt in Greenland, he said.

Twila Moon is a scientist with the U.S. National Snow and Ice Data Center. Melting glaciers in Greenland means "rising seas that threaten homes, businesses, economies and communities," she said.

core –n. a long piece that is taken out of a material for study, often to examine its chemical properties in relation to age

remote — n. far away from people, houses or forms of civilization

signature — adj. something closely linked to someone or something

glacier — n. a huge area of ice that moves slowly down a hill or mountain

region — n. an area of a country or the world that is different from others in some way

sleeping giant — n. something or someone with great strength or power that has not yet been realized