Update Required To play the media you will need to either update your browser to a recent version or update your Flash plugin.
By VOA
20 October, 2014


Now, the day's news, from the Voice of America.

Indonesia has a new president. Joko Widodo was sworn in as president on Monday at the national parliament building in Jakarta. Leaders of Australia, Malaysia and Singapore attended the swearing-in ceremony. So did America's top diplomat, Secretary of State John Kerry.

Turkey and US help Kurds to stop Islamic State

A Turkish official said on Monday the country is helping Iraqi Kurds cross into Syria to aid Kurdish fighters in Kobani, as they try to stop an advance by Islamic State militants. 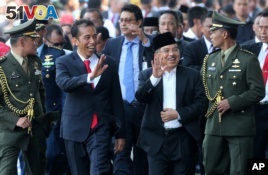 The country's foreign minister made the announcement as the U.S. dropped weapons, ammunition and medical supplies from airplanes to help Kurdish forces defending Kobani.

More good news on the fight against Ebola

The World Health Organization said Nigeria is free from Ebola after 42 days with no new cases of the deadly virus reported.

A WHO spokesman said the development is a "spectacular success story."