Update Required To play the media you will need to either update your browser to a recent version or update your Flash plugin.
By Anne Ball
26 September, 2016


The human eye is unable to see black holes in space. But telescopes with special tools can help find black holes by seeing how they affect nearby stars.

In February, the Japanese space agency sent its Astro-H satellite into orbit around the Earth. The satellite's job was to examine large structures in space, like huge black holes that exist at the center of most galaxies.

Galaxies are large groups of stars. Scientists estimate there are between 100 and 200 billion galaxies in the universe.

The Astro-H satellite fell apart after only a month in space. But in that short time, Astro-H was able to gather important information. It sent back data about the Perseus cluster – a grouping of galaxies in the star constellation Perseus. The Perseus cluster is home to hundreds of galaxies. They are 240 million light years from Earth.

What are black holes?

Black holes are areas where the pull of gravity is so strong that not even light can escape. Usually they happen after very big, supergiant stars explode. The exploded star turns into something called a "supernova." It is very bright, but short-lived. Supernovas create the largest explosions in space.

The material remaining after the supernova explosion collapses. Gravity pulls, or crushes, all the matter into a very small space. When light can no longer escape that space, it is known as a black hole. 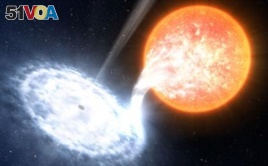 An artist's impression of a black hole, similar to V404 Cyg, taking material from an orbiting companion star.

The Japanese satellite Astro-H was carrying an instrument called an X-ray spectrometer. It was able to measure the way gas flows at the center of the Perseus cluster.

What it found was that the superheated gas at the center of the cluster flowed more calmly than researchers expected. And that told them something about how black holes work, and how galaxies are formed.

Brian McNamara is an astrophysicist with the University of Waterloo in Canada.

"And that gives us a very precise measurement of how much energy is being pumped into this gas by supermassive black holes, and so it allows us to form a more complete picture of how galaxies evolve, how the stars and the gas that will eventually cool out like rain to form the stars, evolves over cosmic time."

The scientists are also looking at the hot plasma — another kind of matter — and gases that surround galaxies.

"This is gas that has not cooled out and condensed out like rain in our atmosphere to form stars, planets, life, for example. So it's the potential for the future, and we're trying to understand what the future destiny of this galaxy and many other galaxies would be."

McNamara says that supermassive black holes may change how galaxies form and change over time.

"The energy released by these giant black holes is very tightly coupled to these atmospheres, which is the stuff out of which future stars will form."

And what that means, he says, is that these huge black holes can affect the rate at which a galaxy grows.

Deborah Block reported on this story for VOANews. Anne Ball adapted her report for Learning English. George Grow was the editor.

Perseus cluster – n. the group of galaxies in the star group of Perseus

cosmic – adj. of, or relating to, the universe or outer space

constellation – n. a group of stars that forms a particular shape in the sky and has been given a name

eventually – adv. at some later time : in the end

condensed – adj. reduced to a smaller or dense form

potential – n. a quality that something has that can be developed to make it better