Update Required To play the media you will need to either update your browser to a recent version or update your Flash plugin.
By Bryan Lynn
14 February 2021


Scientists have created a new map that aims to identify the best sources of water on Mars.

Water is considered a critical resource to support future exploration activities on Mars. Scientists believe the Red Planet contains large amounts of water. But searching from Earth for the best supplies is not easy.

The American space agency NASA has worked for years to identify the best spots for such water. Most of the water on Mars exists as ice because of extremely cold temperatures.

A new study describes and provides detailed mapping for the most likely areas to contain water ice. The study appeared recently in Nature Astronomy. It is part of a project called Subsurface Water Ice Mapping, or SWIM. 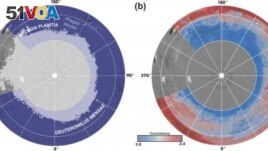 This image, showing two views of the northern hemisphere of Mars, is the result of the study involving researchers at NASA's Jet Propulsion Laboratory and the Planetary Science Institute in Tucson, Arizona. On the left, the light grey shading shows the no

NASA says the SWIM project combines 20 years of data collected by several of the agency's Mars explorers. Researchers at the Planetary Science Institute in Tucson, Arizona, are leading the research, with support from NASA's Jet Propulsion Laboratory in California.

Gareth Morgan is a scientist at the Planetary Science Institute and helped lead the research. He said in a statement, "The goal of SWIM is to provide maps of potential buried ice deposits to support the selection of human landing sites."

He added that Mars ice is a critical resource that could be used for many things, including providing drinking water for humans, growing plants for food, and producing methane fuel and breathable air. "But the most important is to provide fuel for the return trip home to Earth," Morgan said.

Researchers have already experimented with methods that could use water ice on Mars to produce fuel, as well as oxygen.

Richard Davis leads NASA's efforts to find resources on Mars in preparation for sending humans to the Red Planet. He said the identification of water sources on Mars could also help in the search for life, which would likely be found near the water. "The next frontier for Mars is for human explorers to get below the surface and look for signs of microbial life," Davis said.

NASA says most scientists and engineers believe the most reachable subsurface ice exists below polar areas of Mars in the northern hemisphere. The new map centered on these areas -- south of the polar area but north of the equator -- because they hold more favorable conditions for humans. Spacecraft landings would also be easier there.

The map identifies two specific areas on Mars where subsurface ice could likely be found. The first sits among plains in an area known as Arcadia Planitia. Scientists believe the area was formed by ancient volcanic flows. The other contains glacier-filled lowlands in an area called Deuteronilus Mensae.

The process was not designed to measure water ice directly, Gareth Morgan explained. Instead, it was meant to predict the probability of ice supplies based on observed conditions. He said things such as high levels of hydrogen and high radar-wave speeds can suggest that ice is present. Scientists can also look at the rate at which temperatures change on a surface.

NASA says it plans to use the new research to prepare for discussions with top experts to examine possible human landing areas on Mars.

NASA also recently announced it had signed an agreement with international partners to develop a future robotic Mars mapping mission to search for water-ice. The partnership includes the space agencies of Italy, Canada and Japan.

Additional mapping efforts in the 2020s "could help make human missions to Mars possible as early as the 2030s," NASA said. For now, NASA officials plan to keep searching for the best place on Mars to send astronauts so they will have enough local water-ice resources to support their activities.

Bryan Lynn wrote this story for Learning English, based on reports from NASA, Nature Astronomy and the Planetary Science Institute. Ashley Thompson was the editor.

deposit – n. a layer of a substance that has developed from a natural or chemical process

frontier – n. the limits of what is known or what has been done before in an area of knowledge or activity

polar – adj. relating to the north or south pole regions

mission – n. the flight of a spacecraft to perform a certain task or job