Update Required To play the media you will need to either update your browser to a recent version or update your Flash plugin.
By VOA
13 November, 2012

Babies born with serious medical conditions often spend their first days in the intensive-care unit of a hospital. Medical workers put tape on the babies to hold down tubes and electronic devices. Experts say having to change the tape daily or remove it when those babies are well enough to go home can be painful and even dangerous.

The Massachusetts Institute of Technology says more than one million people suffer skin injuries from medical tape removal each year. But now there is a new kind of tape that is much softer. 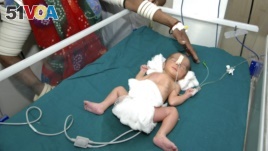 a Premature Baby in India has medical tape placed on her face.
Jeff Karp helped create the new tape. Doctor Harp works the Center for Regenerative Therapeutics at Brigham and Women's Hospital in Boston, Massachusetts. He says newborns moved to intensive-care Unit are usually very sick.

"Children in these units are, are really just wrapped in these tapes, [which are] constantly needing to be replaced. These are really important to secure devices to the skin for monitoring. So, for example, temperature probes, endotracheal tubes to maintain breathing, as well as EKG leads for monitoring a, a pulse."

Removing medical tape can be painful. It also may damage the skin of newborn babies. Doctor Karp says this is one of the biggest problems facing hospitals.

"There's all sorts of horror stories of, of permanent damage being done, as well as tissue torn off from the skin, even ears being torn."

He and his team wanted to create a medical tape that was strong and could be removed without harming the skin.

Normally, medical tape has two layers -- a non-sticky backing and the sticky part. The new tape adds another layer of sticky adhesive. It remains on the skin after the tape is removed. Jeff Karp says this adhesive can be easily removed with talcum powder.

"What we found is that if you have a continuous layer of adhesive that's left -- as is, you know, done with our system -- when you just push on this adhesive it can easily roll off the skin and it'd be much less painful and, and much quicker to remove."

The new, softer adhesive tape was designed for newborns. But the researchers say it will also help much older patients, whose thin, weak skin can tear.

The new tape is made from materials already widely used. Doctor Karp believes it will receive government approval, and be available soon to hospitals and medical centers.

The researchers have requested patent rights to the tape. They are also asking health officials for permission to test it on adults.

A report on the development of the painless medical tape was published in the journal Proceedings of the National Academy of Sciences.
Related Articles
go top