Update Required To play the media you will need to either update your browser to a recent version or update your Flash plugin.
By Ashley Thompson
03 December, 2018


Mexico's new president has taken first steps in leading the country as a "common man." He says his rule marks the end of years of secrecy, high security and luxury living enjoyed by past presidents.

Andres Manuel Lopez Obrador was sworn in Saturday to a six-year term. By Monday morning, he was already holding his first news conference.

Such events were extremely rare in past presidencies. Lopez Obrador told reporters that he plans to hold a press conference almost every day. He did the same as mayor of Mexico City from 2000 to 2005.

There have already been other signs of changes, too. Mexico's presidential airplane, for example, has been sent to California to be prepared for sale. Mexico paid $368 million for the plane in 2012, just before Enrique Pena Nieto took office as president.

The decision to sell the costly airplane is part of the new leader's push for austerity, or money-saving measures. Lopez Obrador plans to continue flying on commercial planes in coach, the lowest priced area of seats.

He arrived at Mexico City's National Palace Sunday in the same small, white car he used before becoming president. He has refused the military bodyguards used by past presidents. Instead, he travels with a small team of assistants who also provide security. 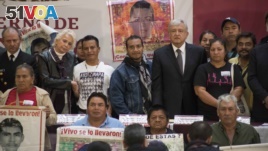 Mexico's President Andres Manuel Lopez Obrador poses for a photo with the parents of the 43 missing Mexican students of Ayotzinapa, at the National Palace in Mexico City, Monday, Dec. 3, 2018. (AP Photo/Christian Palma)

"I feel safe, protected and supported by the Mexican people," Lopez Obrador said.

luxury - n. a condition or situation of great comfort, ease, and wealth