Update Required To play the media you will need to either update your browser to a recent version or update your Flash plugin.
By Jim Dresbach
26 August, 2016


United States President Barack Obama will add to a national monument near the coast of Hawaii.

The Obama administration announced the move Friday. It will create the world's largest marine protected area.

The presidential action will add to the size of a monument created by President George W. Bush in 2006. The Papahanaumokuakea Marine National Monument now will be increased to about 1.5 million square kilometers. That is more than twice the size of the American state of Texas.

The expanded area is considered a sacred place for Native Hawaiians.

Obama will travel to the monument next week to bring attention to the need to protect public lands and waters from climate change.

The move bans commercial fishing and new mining in the area of the monument. Fishing for recreation may be done with a permit. Scientific research and the removal of fish and other resources for Native Hawaiian cultural practices also will be permitted.

Some fishing groups are concerned that an expansion of the marine national monument will hurt their industry.

Sean Martin is the president of the Hawaii Longline Association. Hawaii's longline fishing fleet supplies much of the fresh tuna and other fish to Hawaii.

Martin has previously estimated the fleet catches about 900,000 kilograms of fish each year from the area proposed for the expanded monument.

He said he was "disappointed'' by Hawaiian Governor David Ige's decision to support the expansion. He said the monument's expansion would be based on political and not scientific reasons.

The Obama administration has described the expansion as protecting more than 7,000 species of marine life. It also says the move will protect and improve the environment. 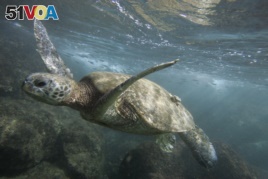 A green sea turtle is seen off the coast of Oahu, Hawaii in 2006.

Shipwrecks and crashed aircraft from the Battle of Midway in World War II are in the expansion area. The battle was fought in June of 1942 and marked a major shift in that war.

The Obama administration said the expansion is an answer to a proposal by Democratic Senator Brian Schatz of Hawaii and Native Hawaiian leaders.

The federal government will give Hawaii's Department of Natural Resources and its Office of Hawaiian Affairs a greater role in supervising the monument.

VOA News staff wrote this story with adds from the Associated Press. Jim Dresbach adapted it for Learning English. Mario Ritter was the editor.

monument – n. a building or place that is important because of when it was built or because of something in history that happened there

marine – adj. of or relating to the sea or the plants and animals that live in the sea

longline – n. a type of deep-sea fishing equipment using a long main line anchored to the bottom to which shorter lines with baited hooks is attached

fleet – n. a group of ships or vehicles that move or work together

tuna – n. a large fish that lives in the ocean and is eaten as food