Update Required To play the media you will need to either update your browser to a recent version or update your Flash plugin.
By Bryan Lynn
24 September 2022


A new online bird guide documents the extraordinary paths of numerous species in the United States.

The recently published guide is called the Bird Migration Explorer. It is a mapping tool created from a huge collection of scientific and community data. It covers the travel paths of about 450 bird species in the Americas.

The guide, which is free to the public, is an ongoing project between 11 groups that collect and examine data on bird movements. Among them are the Smithsonian Migratory Bird Center, the U.S. Geological Survey (USGS), Georgetown University, Colorado State University, and the National Audubon Society. 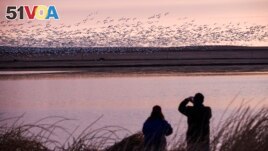 For the first time, the online tool brings together online data from hundreds of scientific studies that use GPS markers to follow, or track, bird movements. The guide also includes more than 100 years of bird data collected by the USGS, community science observations and genetic information of feathers.

"The past twenty years have seen a true renaissance in different technologies to track bird migrations around the world...," said Peter Marra. He is a bird migration expert at Georgetown University who took part in the project.

The online guide permits users to enter a species and then watch bird movements over the period of a year. For example, data from 378 tracked osprey birds show up as yellow dots that move between coastal North America and South America.

Users can also enter the city where they live and choose another place on the map for a list of birds that migrate between the two areas. For example, ospreys, bobolinks and at least 12 other species migrate between Washington, D.C. and Fonte Boa, Brazil.

Melanie Smith is the program director for the guide. She told The Associated Press that as new tracking data becomes available, the site will continue to expand. The next plan for expansion will add more data about seabirds.

Michael Herrera lives in Washington, D.C. and started birdwatching about four months ago. He said the guide quickly became a favorite. "It's almost like this hidden world that's right in front of your eyes," he said. "Once you start paying attention, all these details that were like background noise suddenly have meaning."

During the past 50 years, the population of birds in the U.S. and Canada has dropped nearly 30 percent, with migratory species facing some of the biggest drops.

But some birds still make extraordinary trips. One example is the bay-breasted warbler, a small songbird. Two times a year, the bird flies nearly 6,437 kilometers between Canadian forest and its wintering grounds in northern South America.

Jill Deppe is the director of the migratory bird program at the National Audubon Society. She told the AP she sees migratory birds as "little globetrotters."

renaissance – n. a time when something becomes popular again

globetrotter – n. someone who often travels to a lot of different countries