Update Required To play the media you will need to either update your browser to a recent version or update your Flash plugin.
By VOA
18 September, 2016


People in Vietnam can now get a cup of New Orleans coffee.

PJ's Coffee is a business based in New Orleans, the largest city in the American state of Louisiana. The city is known for great food, including coffee, and music.

The new PJ's coffee shop is opening in Ho Chi Minh City. PJ's has 84 shops in seven American states. This is the company's first store outside the United States.

A Shared Love for Coffee

Ryan Stansbury is with PJ's Coffee. In his words, Vietnam is a "good fit" for the Louisiana-based company.

New Orleans and Ho Chi Minh City also have very hot weather. That explains why iced coffee and iced tea are so popular in both cities, Stansbury said.

"That's good for us because we hung our hat on making cold-brewed iced coffee since our founder started PJ's in 1978," he said. 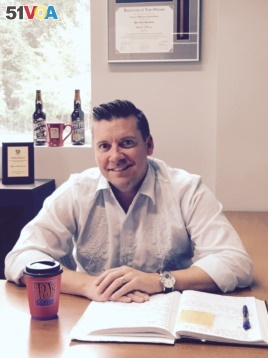 Starting a business in Vietnam is not easy for an American company, Stansbury said. PJ's worked with a Vietnamese business leader to help work through the country's business rules.

Stansbury said PJ's is paying "a lot of money" to export PJ's coffee to Vietnam. Those costs could drop if the U.S. Congress approves the new Trans Pacific trade deal.

President Barack Obama visited Vietnam in May. He said the trade deal will increase American jobs by lowering costs for U.S. companies to export products.

Stansbury said that besides the high costs of transporting coffee, language was another barrier. It was hard for English-speaking PJ's Coffee workers to train new Vietnamese-speaking employees.

"It usually takes two weeks, but it took us about three times as long to get the training done because of the language barriers," Stansbury said.

PJ's has also made changes to satisfy the tastes of the Vietnamese market.

Green tea is popular in Vietnam, and PJ's added a drink that it calls Green Tea Velvet Ice. It is a combination of milk, ice, green tea powder and fruit syrup.

The company also offers a sweet iced coffee drink with condensed milk and ice. It is called "Ca-Phe Sua Da." PJ's is looking to add the drink to its U.S. coffee shops.

Because Vietnamese often sit with friends for long periods of time at coffee shops and restaurants, PJ's is looking to add more food products. It could include the soup and noodle dishes so popular in Vietnam and Vietnamese restaurants all over the world, Stansbury said.

PJ's has a lot riding on its Vietnam coffee shop. Plans are to add more coffee shops in Vietnam, and set up others in Malaysia, he said.

Secretary of State John Kerry spoke last month about the "incredible changes in Vietnam" since he fought for the United States in 1968 during its war with North Vietnam.

Kerry said he always loved the Vietnamese people, but is now excited by the "pulsating entrepreneurial energy" throughout the Southeast Asian country.

Reporter Ralph Jennings wrote about the growing middle class in Vietnam. He said traffic problems have increased in the financial and entertainment district of Ho Chi Minh City.

"Restaurants serving foreign cuisine, which is more expensive than local food, fill at night," he wrote. He said they are full of people talking noisily and using mobile phones.

We want to hear from you. Write to us in the Comments Section and share your views on 51VOA.COM. Do you like coffee? Do you choose hot or cold coffee? And what do you like in your coffee?

cup - n. a small round container that often has a handle and that is used for drinking hot liquids such as tea and coffee

condensed milk - n. canned milk with sugar added and much of the water removed

shop - n. a building or room where goods and services are sold- adj. to be filled with activity

pulsating - adj. to be filled with activity

entrepreneurial - adj. willing to risk loss in order to make money with a new product or service

condensed milk - n. canned milk with sugar added and much of the water removed

cuisine - n. food that is cooked in a particular way