Update Required To play the media you will need to either update your browser to a recent version or update your Flash plugin.
By John Russell
27 November 2021


Le Robert, one of France's leading dictionaries, said recently that it added a new pronoun to its online list of words.

The publication's researchers noticed growing usage of the pronoun in recent months.

The pronoun is "iel." It can be used with non-binary people - people who do not identify themselves as male or female. 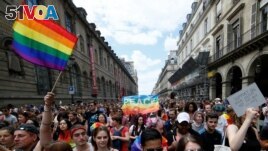 In English, "they" has been in use for several years by people who do not identify themselves as male or female. Some well-known people – including U.S. Vice President Kamala Harris – put their pronoun on Twitter, in emails and on documents. This shows readers which pronoun to use with them.

The move by Le Robert created debate in a country where the rules of language are very important. It also has created debate in the French press and on social media, with several politicians taking issue with the term.

The French government is against the idea. The Education Ministry resisted earlier attempts to make such changes in language teaching at schools.

Education Minister Jean-Michel Blanquer does not support teaching what is called inclusive writing. That is writing that uses new kinds of pronouns such as "iel."

"Inclusive writing is not the future of the French language," Blanquer wrote on Twitter recently.

In a letter to the Academie Francaise, Jolivet wrote that the use of the words "iel, ielle, iels and ielles" would lead more people to accept the "woke ideology," which would destroy French values.

Jolivet added that the dictionary's action "undermines our common language...and divides users rather than uniting them."

Le Robert director Charles Bimbenet said dictionaries include many words that express different ideas. But the dictionaries themselves do not necessarily support these ideas. Since the word "iel" is used more and more, it is useful to include the term in the dictionary.

Bimbenet added, "The Robert's mission is to observe the evolution of a diverse French language as it evolves and to report on it. Defining the words that speak of the world is to help understand it better."

Geert De Clercq reported on this story for Reuters. John Russell adapted it for Learning English. Mario Ritter, Jr. was the editor.

dictionary –n. a book that contains words listed in alphabetical order and that gives information about the words' meanings, forms and how to say them

evolution –n. a process of slow change and development