New Report Looks at Wedding Traditions Around the World

Update Required To play the media you will need to either update your browser to a recent version or update your Flash plugin.
By Susan Shand
04 May, 2019


A wedding in India can have 500 or more, while in Colombia a wedding is much smaller. "It's actually a pretty big honor to be invited to a Colombian wedding," a spokesperson said.

When are the most popular months to get married? Do couples ask for their parents' approval first? How many people attend the wedding?

These are some of the questions answered in a new report about marriage traditions around the world. It was released this week by the wedding websites TheKnot.com, WeddingWire.com and the Spanish-language Bodas.net.

Researchers surveyed 20,000 newly married couples in 14 countries about their weddings. They found that in much of Europe and North America, September and October are the most popular months to get married.

In the United States, more than two-thirds of couples still want their parents' approval before getting married. But less than 10 percent of couples in Italy and Spain do. In Colombia, the average wedding has 91 guests. In India, the average is 524.

"One of the similarities that we saw across many countries was the strong desire to (personalize) a wedding," said Lauren Goodson. She is one of the senior directors of The Knot Worldwide, the company that did the study. 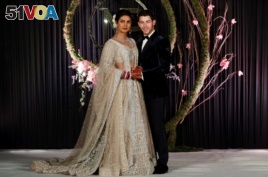 But, for the most part, wedding traditions are different, even in the same country. In India, for example, Hindu couples prefer to get married on days that are believed to bring good luck.

The amount of time spent planning a wedding can also be different. Colombian couples had the shortest wedding planning period at seven months. That was followed by India and Chile at eight months. Goodson said countries where couples are less likely to live together before marriage usually have the shortest planning periods.

As for the bride's dress, women in the Americas and Europe continue to wear white dresses. But the style of the dress is often non-traditional, Goodson added. In the U.K., 22 percent of brides wore a tiara, just like Meghan Markle, she said

Nearly everywhere, music keeps the party going until late into the night. In Chile and Peru, a Latin American tradition of la hora loca, or "crazy hour," is popular.

At one recent wedding in Santiago, Chile, a couple had lighted robots blow confetti in the air while guests danced under bright lights, according to the report. Another couple dressed like Super Mario Bros to surprise their guests.

The Associated Press reported this story. Susan Shand adapted it for VOA Learning English. Kelly Jean Kelly was the editor.

wedding – n. a ceremony in which two people get married

couple – n. two people who are married or who have a romantic or sexual relationship

guest – n. someone who is invited to attend an event or visit a home

tiara – n. a small crown that is decorated with jewels and that is worn by women or girls on special occasions

sponsor – n. someone who takes the responsibility for someone or something