New Research: India’s Actual COVID-19 Deaths Could Be in Millions

Update Required To play the media you will need to either update your browser to a recent version or update your Flash plugin.
By Bryan Lynn
20 July 2021


New research suggests that the actual number of COVID-19 deaths in India could be as much as 10 times the official count.

An independent, non-government report released Tuesday estimates the number of deaths at between 3 to 4.7 million, from January 2020 to June 2021.

India's official government estimate of COVID-19 deaths is more than 414,000. But most health experts agree that the actual number is likely much higher.

The new report estimates the number of "excess deaths" from the disease. This is generally defined as the difference between the number of observed deaths and the number of expected deaths during a specific period of time.

The research was led by Arvind Subramanian, the Indian government's former chief economic adviser. Researchers from the Center for Global Development -- a Washington-based think tank -- and Harvard University also helped produce the report. 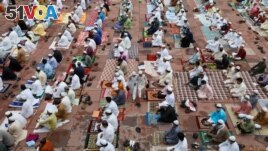 Muslims attend Eid al-Adha prayers at the Jama Masjid (Grand Mosque) during the outbreak of the coronavirus disease (COVID-19), in the old quarters of Delhi, India, August 1, 2020. (REUTERS/Adnan Abidi)

The researchers admitted that it will be difficult to get a completely correct death number in India. However, such a number "is likely to be an order of magnitude greater than the official count," they said.

The team said the official count likely missed deaths because of overcrowded hospitals and widespread failures in the country's health system during a huge rise in cases earlier this year.

"True deaths are likely to be in the several millions not hundreds of thousands," the report said. The researchers said this makes the deaths "arguably India's worst human tragedy since Partition and independence."

Partition was a process that divided the British-ruled Indian subcontinent into independent India and Pakistan in 1947. When independence came, up to 1 million people are believed to have been killed in ethnic violence involving Hindus and Muslims.

The report on India's COVID-19 deaths was based on three forms of data. One involved records from the civil registration system on births and deaths across seven Indian states. Another used blood tests showing levels of the virus in India alongside worldwide COVID-19 death rates. In addition, information was used from an economic survey of nearly 900,000 people completed three times per year.

The researchers warned that each method had weaknesses, such as the economic survey leaving out the causes of death. So they decided to look at deaths from all causes and compared that data to death rates in past years, a method widely considered accurate.

The team also said that virus presence and COVID-19 deaths in the seven states studied may not be consistent across all of of India. This is because the virus could have spread more in cities than rural areas and the fact that health care quality greatly differs around India.

Other nations are also believed to have undercounted deaths in the pandemic. But the difference is thought to have been greater in India because it has the world's second highest population at 1.4 billion. In addition, not all deaths are recorded in the country, even without a pandemic.

India's health ministry did not immediately answer a request by The Associated Press to comment on the report.

Dr. Jacob John, who studies viruses at Christian Medical College at Vellore in southern India, examined the report for the AP. John, who was not part of the research, said the report confirms the damaging effects that COVID-19 had on the country's underprepared health system.

The research supports "the observations of other fearless investigative journalists that have highlighted the massive undercounting of deaths," John added.

The Associated Press reported on this story. Bryan Lynn adapted the report for Learning English. Hai Do was the editor.

excess – n. more of something than is usual or needed

think tank – n. an organization that consists of a group of people who think of new ideas on a particular subject or who give advice about what should be done

magnitude – n. the large size or importance of something

consistent – adj. always behaving or happening in a similar way

highlight – v. to emphasize something or make people notice something