Update Required To play the media you will need to either update your browser to a recent version or update your Flash plugin.
By VOA
07 September, 2018

Radio and television reporter Vladimir Solovyov is the host. Solovyov is a supporter of Putin and has produced several documentaries about him.

Viewers of the new show saw Putin spending time outdoors, including during a recent vacation in Siberia. The Russian leader was also shown meeting with young people and visiting a group of miners on the job. 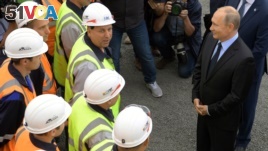 The show included interviews with Putin's official spokesman and a reporter who covered the president's activities last week.

The Russian government has continuously expanded its control over the nation's television stations since Putin took office in 2000. Putin's activities traditionally receive wide coverage on state television. But, a weekly show about news events as seen through the work of Putin is new to Russia.

In the show, a long-serving lawmaker praised Putin for how he dealt with the retirement issue. The lawmaker said the president "wasn't scared to take responsibility" for the matter.

Putin spokesman Dmitry Peskov spoke about how the 65-year-old leader puts a lot of time and effort into staying physically fit. He said Putin likes to exercise for about 90 minutes each day, including swimming at least one kilometer whenever he can.

The show included recordings of Putin's recent vacation in Russia's Tuva Republic, where he walked in the mountains with the republic's leader.

Putin is also shown meeting with schoolchildren and answering their questions.

The show had many critics on Russian social media, with many describing it as pro-Putin propaganda. But speaking to reporters after the program aired, Peskov said the government did not order the program to be made. He said the television station came up with the idea and acted on its own. Peskov also said he thought the information in the show was presented in a balanced way.

Bryan Lynn wrote this story for VOA Learning English, based on reports from Carl Schreck of RFE/RL and the Associated Press. RFE/RL and VOA are both part of the U.S. Agency for Global Media (USAGM), formerly called the Broadcasting Board of Governors. Caty Weaver was the editor.

humane – adj. kind, especially towards people or animals that are suffering