This is the VOA Learning English Education Report.

More and more Africans are using text messages, e-mail and social media to communicate. In Senegal, educators are using new technologies to teach women to read. The United Nations Educational Scientific and Cultural Organization, UNESCO, launched the program in Senegal two years ago. But UNESCO officials are now expanding it to as many as six other African countries.

Mariama Daffe sits in front of a television at her home in a community near Senegal's capital Dakar. She is learning to write and work with numbers. Ms. Daffe started this home-study program a year ago. She was 39 years old at the time.

The Ministry of Education joined with UNESCO to create these training modules for literacy -- reading and writing. The program appears daily on state television. Women taking part say these lessons have made them more independent.

Mariama Daffe says, "These days I have my mobile telephone, and I can read messages and I can send messages, too."

Ms. Daffe finishes her lesson and starts preparing dinner for her husband and three children. She says the TV programs are convenient. She studies three modules a week, yet she has a full-time job and travels two hours by bus every day.

At-home study programs are easy to operate and not costly. That makes them especially useful for a place like Senegal, which has limited money to teach literacy.

But some women prefer the classroom experience.

Ten minutes down the road from Mariama Daffe's home, women write on a chalkboard at the local elementary school. Thirty-nine-year-old Astou Keita says it is never too late to learn.

She says, "My kids laugh at me. They think it is funny that I started learning at this age."

Mamadou Diallo is a teacher. He uses a laptop computer and a projector to prepare an interactive display wall. The students use the wall while a class in mathematics is taught. 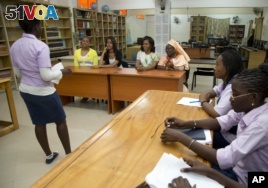 In this file photo, a student reads for U.S. First Lady Michelle Obama during her visit to the all-girls Martin Luther King Middle School, June 27, 2013 in Dakar Senegal. (AP Photo/Carolyn Kaster)
Mr. Diallo says the first time the women saw the interactive display wall, they became very interested. They could not wait to try it. He told them, "First, we need to work on the chalkboard before we can start the math."

He asks a student to read a word problem and do the work with numbers.

She then answers the mathematical problem on the wall.