Update Required To play the media you will need to either update your browser to a recent version or update your Flash plugin.
By Bryan Lynn
08 October, 2018


Researchers say they have developed technology that could predict heart attacks years before they happen.

The researchers report using mathematical algorithms to examine computed tomography, or CT, images of a patient's heart. A CT scan uses X-rays and a computer to make detailed pictures of bones, organs and other tissue inside the body.

The new method was developed by researchers at the University of Oxford in England. A report on their study was published in the medical journal The Lancet. Also taking part in the study were teams from Friedrich-Alexander-University in Erlangen, Germany, and the Cleveland Clinic in the United States.

Most heart attacks result from a build-up of fatty tissue inside arteries that carry blood from the heart to other areas of the body. Too much buildup can block this flow of blood and cause a heart attack.

Currently, doctors use CT scans to learn when a sticky substance called plaque has already built up inside an artery. The new technology is designed to predict which arteries are at risk for future buildup. 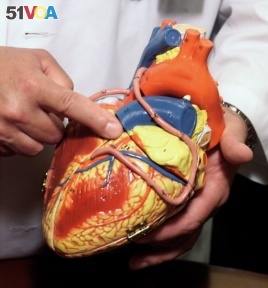 The researchers reported using computer algorithms to examine CT scans to measure how much fat is present around heart arteries. That fat changes when an artery becomes inflamed, serving as an early warning system for heart attacks.

Charalambos Antoniades is a professor of cardiovascular medicine at Oxford University. He told the Reuters news agency he believes the research shows this method could be very effective in getting patients to take early steps to prevent future problems.

"Say your arteries are inflamed and a narrowing will be developed five years down the line. So maybe you can start preventive measures to avoid this formation of plaques," he said.

"If you are able to identify inflammation in the arteries of the heart, then you can say which arteries...will cause heart attacks."

Antoniades added that researchers had yet to estimate exactly how many heart attacks could be prevented. But he said he believes the technique could help identify between 20 to 30 percent of people at risk of having one.

He added that the new technology will make such predictions easier because it works together with existing CT technology.

The research was based on two large, independent studies of 4,000 patients in Erlangen, Germany, and the Cleveland Clinic.

A company with ties to Oxford University is developing a service to examine CT scans of patients around the world, Reuters reported.

Bryan Lynn wrote this story for VOA Learning English. It was based on reports by Reuters and The Lancet. George Grow was the editor.

scan – n. looking at the inside of something by using a special machine

artery – n. one of the tubes in the body that carries blood from the heart

inflammation – n. a swelling of part of the body