Update Required To play the media you will need to either update your browser to a recent version or update your Flash plugin.
By Anna Matteo
14 November, 2016

Cancer is a leading cause of death around the world.

When it comes to cancer, the sooner you know you have it, the better your chances of surviving.

A new blood test could change the way doctors and researchers find cancer in patients. Researchers say the test could provide clues to the early forms of the disease. 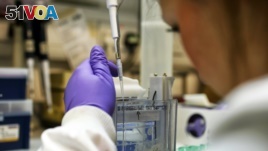 A scientist studies proteins in a lab at the Institute of Cancer Research in Sutton, England, 2013. (PHOTO REUTERS/Stefan Wermuth)

Scientists at the University of Swansea in Wales came up with the idea.

Gareth Jenkins is a professor at the university. He says he and his team did not look for cancer. They instead looked for a by-product of cancer. They looked for, what Jenkins calls, the collateral damage of cancer – the damage left by the disease.

In this case, the by-product was mutated red blood cells.

The researchers used normal laboratory equipment to perform the tests. This equipment looks for changes in the structure of millions of red blood cells. Those mutated cells lack a surface protein that healthy cells normally have.

"The essence of the test is looking for very rare cells which have picked up a mutation. The number of mutated red blood cells in a healthy person are around 5 or so mutant cells per million; so, you have to look at millions of red blood cells to detect those rare events. These numbers increase in cancer patients -- they go up to 40 or 50 mutants on average."

The researchers tested blood from about 300 people, all of whom have cancer of the esophagus. Patients with esophageal cancer have high levels of mutated red blood cells. Jenkins says that at this point he is not sure if other cancers would produce similar results.

"We've only been looking at esophageal cancer patients. ‘Do other types of cancer patients have high levels of these mutant red blood cells as well?' We don't know the answer to that question at present."

The hope is that the new test and other non-invasive methods could one day become part of commonly used medical methods. He says that using a battery, or series, of tests will be the best way to find out if a person has cancer.

"A battery of tests, based on different principles looking at blood, looking at different bodily fluids -- breath, urine -- will be the best way of getting a comprehensive view of whether an individual might or might not have cancer."

These new technologies could save millions of lives.

Deborah Block reported this story from Washington for VOANews. Anna Matteo adapted her report for Learning English. George Grow was the editor.

non-invasive – adj. medical : done without cutting the body or putting something into the body

collateral damage – n. injury inflicted on something other than an intended target; specifically : civilian casualties of a military operation

mutate – v. biology : to cause (a gene) to change and create an unusual characteristic in a plant or animal : to cause mutation in (a gene)

essence – n. the basic nature of a thing : the quality or qualities that make a thing what it is

battery – n. a group or series of tests; especially : a group of intelligence or personality tests given to a subject as an aid in psychological analysis

principle – n. a law or fact of nature that explains how something works or why something happens