Update Required To play the media you will need to either update your browser to a recent version or update your Flash plugin.
By Phil Dierking
02 January, 2017

Guterres is a former prime minister of Portugal. At the U.N., he served as the High Commissioner for Refugees. He told the U.N. in his speech that the question of how to help millions of people caught in conflict and war weighs heavily on his heart.

Guterres said that civilians are faced with deadly force, killed and injured, forced from their homes, and put into poverty. He also said that unfortunately, even hospitals and aid groups are not safe from violence.

Guterres called on the U.N. to "make one shared New Year's resolution: Let us resolve to put peace first." 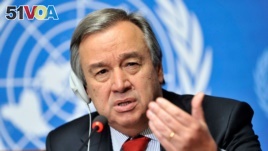 In support of the goal of peace, Guterres called for measures from solidarity and kindness in people's daily lives, to dialogue and respect for political differences. He said peace should be a guide when seeking cease-fires or compromise while negotiating solutions to problems.

Guterres has promised to bring people together at a time when the U.S. President-elect Donald Trump has voiced concerns about the effectiveness of the U.N. The new secretary-general promised to work with the Trump administration to seek cooperation on the challenges facing the U.S. and U.N. in the coming years.

Outgoing secretary-general Ban told the U.N. in his final speech Friday that he is "so very proud" to have worked with them for the past 10 years. He asked U.N. members to set goals and pay attention to important issues facing the world. These issues, he said, include sustainable development, climate change, women's empowerment, youth empowerment and others.

Ban urged members "to never give up. To keep dreaming. To keep believing, and to keep working hard until we achieve progress."

He asked the U.N. to place importance on rights, and to stand up for "those who are left behind", including those who do not get attention from the world community but still need help.

He said he felt "a bit like Cinderella" because of the quick change at midnight. But he promised always to be a "global citizen" and said his heart will always be with the people he worked with at the United Nations.

This story was originally written for VOAnews.com. Phil Dierking adapted this story for Learning English. Mario Ritter was the editor.

What goals do you think the U.N. should have this year? We want to hear from you. Write to us in the Comments Section or on 51VOA.COM.

Cinderella – n. the name of a girl in a fairy tale who is treated badly by her stepmother and stepsisters but who marries a prince in the end.

dialogue - n. a discussion or series of discussions that two groups or countries have in order to end a disagreement

empowerment – n. power that has been given to someone or something

resolve – v. to find an answer or solution to

sustainable development – n. economic development that is done without depletion of natural resources