New US Congress in Divided Government

Update Required To play the media you will need to either update your browser to a recent version or update your Flash plugin.
By Hai Do
03 January, 2019


The 116th United States Congress returned the first woman to the position of Speaker of the House and swore in the most diverse group of lawmakers in history.

The legislators took office Thursday in the middle of a partial government shutdown. The shutdown dispute is over President Donald Trump's demand for money to build a wall along the U.S-Mexico border.

Nancy Pelosi was the first woman to ever serve as Speaker of the U.S. House of Representatives. She did so from 2007 to 2011. On Thursday, she was re-elected to the office, as Democrats took control of the House. Republicans still hold the majority in the Senate.

The new Democratic-controlled House has more women and more minorities than in the past. It includes New York's Alexandria Ocasio-Cortez, the youngest woman ever elected to Congress. There is also Michigan's Rashida Tlaib and Minnesota's Ilhan Omar, the first two Muslim women to be elected. New Mexico's Deb Haaland and Sharice Davids of Kansas became the first two Native American women in Congress.

Women hold 102 seats in the House and 25 seats in the Senate. There are also now 10 lawmakers who identify as LGBTQ. 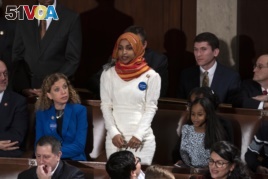 Rep. Ilhan Omar, a freshman Democrat representing Minnesota's 5th Congressional District, votes for Nancy Pelosi to be speaker of the House of Representatives on the first day of the 116th Congress, at the Capitol in Washington, Thursday, Jan. 3, 2019. (A

Republicans added to their majority in the Senate after the November midterm elections.

In her opening speech Thursday, Pelosi noted she was especially "proud to be the woman Speaker of the House of this Congress, which marks 100 years of women winning the right to vote, as we serve with more than 100 women in the House of Representatives – the highest number in history."

The new speaker added, "This House will be for the people." She said its mission would be "to lower health costs and prescription drug prices, and protect people with pre-existing conditions; to increase paychecks by rebuilding America with green and modern infrastructure."

Pelosi also said that she will seek to work with Republicans in the House, as well as with the Republican-controlled Senate and the president, who is a Republican.

In her first act as speaker, Pelosi announced that Democrats would pass legislation to re-open the government and end the shutdown. The bill, however, does not include the money that Trump has demanded for his border wall.

Senate Republican Majority Leader Mitch McConnell says he had no plans to consider bills proposed by the House unless Trump agrees to sign them into law.

That means the shutdown is sure to continue.

partial - adj. not complete or total

infrastructure - n. structures such as roads and bridges that are needed for a country or region