Update Required To play the media you will need to either update your browser to a recent version or update your Flash plugin.
By Dan Novak
14 June 2022

Charter schools are different from traditional public schools. They operate similarly to private schools, but still receive money from the government.

The National Alliance for Public Charter Schools says that charter schools are a public "school of choice." They are free to attend like other public schools. 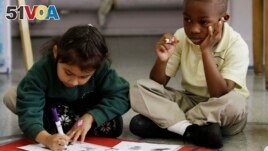 Charters are given more freedom than traditional public schools in operations and development of curriculum. They are not governed by local school boards and are free from many state and local regulations. To get permission to operate, a school must establish a "charter," promising to meet certain academic standards.

The administration's proposed new rules would not affect existing charter schools. But new charter schools seeking federal money would have to meet new requirements. For example, the federal government would give priority to charter schools that work with local school districts.

Opponents of the new rules for the federal Charter Schools program say they would limit charter school growth. They argue that the new requirements are too difficult to meet.

But Assistant Education Secretary Roberto Rodríguez argued that there should be more supervision of how charter schools are funded. In an interview with Chalkbeat last week, he said that 15 percent of charter schools that received federal start-up money never opened. He said that cost the federal government $174 million.

The Washington Post editorial board published an article in April critical of the administration's new rules, calling them a "sneak attack." It argues that the rules are "designed to squelch charter growth."

Nina Rees is the president of the National Alliance. She said, "Traditional schools may be under-enrolled, but parents are looking for more than just a seat for their child. They want high quality seats."

Charter schools have support across political parties. Research has also shown they have improved over the last several years, and sometimes outperform traditional publics. But many charters also have had mixed success.

An upcoming decision by the Supreme Court could also change how charter schools operate.

Many states, like Maine, offer "voucher" programs. This is a program in which the government provides money, or vouchers, to families for attendance at a private school of their choice. Private schools are not operated by the government and cost money to attend.

A law in Maine challenged in the Supreme Court makes it illegal for families to use the money to attend a private school that is religion-based.

That could lead all states with voucher programs to include religious schools. It is illegal in the United States for the government to directly fund religious schools and other religious institutions because of the separation of church and state in the U.S. constitution.

Some legal experts say that because charter schools are not officially operated by the government, they should be permitted to be religious.

A paper in the conservative Manhattan Institute for Policy Research argues "religious charter schools are not only constitutionally permissible in most states... but where they are permissible, they may not be prohibited."

"The bottom line is: Charter schools, as public schools, can never be religious institutions," Rees said in Chalkbeat. "And anyone who says differently is flat-out wrong."

curriculum— n. the courses that are taught by a school, college, etc.

standard — n. a level of quality, achievement, etc., that is considered acceptable or desirable

priority — n. something that is more important than other things and that needs to be done or dealt with first

sneak — adj. done while others are not paying attention

squelch— v. to stop from continuing by doing or saying something

enrollment — n. a policy or process by which parents may send their children to a different public school than the one in their own community

segregation — n. the practice or policy of keeping people of different races, religions, etc., separate from each other

prohibit — v. to order someone not to use or do something