Update Required To play the media you will need to either update your browser to a recent version or update your Flash plugin.
By VOA
04 December, 2014


New York City says it is planning to retrain its police force. Mayor Bill de Blasio announced the retraining of the city's 20,000-member police force Thursday. He said it is essential that police treat people of all races equally.

On Wednesday, a New York grand jury ruled against charging a white police officer in connection with the death of an unarmed black man. The officer had held his arm around the man's neck and forced him to the sidewalk before he died. A witness video of the act shows the man repeatedly saying he could not breathe. 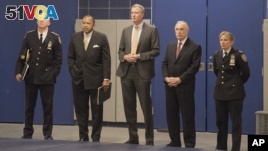 A top New York police official says the three-day retraining will be completed by June.

American space agency officials have delayed plans to launch a new spaceship for at least a day. The officials say their decision was based on several problems, including equipment failure and winds at the Cape Canaveral launch area in Florida.

The spaceship is designed to take American astronauts to the moon and beyond. This first trip is to be unpiloted, however. The ship is to orbit Earth twice before returning. The orbit was to be 14 times farther from Earth than that of the International Space Station.

NASA officials say the launch could take place on Friday.

A group of Al Qaida in the Arabian Peninsula has threatened to kill an American hostage. The group says the United States must meet its demands within three days to stop the killing of a man who says he is Luke Somers. A video released Thursday shows him saying that he is certain his life is in danger. Gunmen in Saana captured an American news photographer of that name last year.

The group has not made clear what it expects from the United States.

Al Shabab claims the downing of a Kenyan plane

The Somali militant group Al Shabab says it has shot down a Kenyan military plane returning from fighting in Somalia. But the Kenyan military denies the report. It says technical problems caused the crash in the area of Kismayo.

Earlier Thursday, a spokesman for al-Shabab said its gunman had killed a former Somali lawmaker in the Somali capital, Mogadishu. The spokesman said a current member of Parliament was injured in the attack.

orbit – n. the curved path that something (such as a moon or satellite) follows as it goes around something else (such as a planet)

certain – adj. not having any doubt about something: convinced or sure

technical – adj. relating to the practical use of machines or science in industry, medicine, etc.