Update Required To play the media you will need to either update your browser to a recent version or update your Flash plugin.
By Anna Matteo
07 April, 2016


When emergency workers arrive at an old firehouse in New York City, the way they greet each other is not what you might expect. 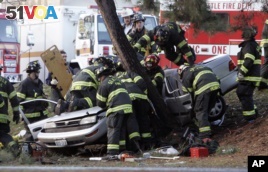 First responders are just as the name states - the first emergency personnel to respond to a car crash, fire or other disaster. (AP PHOTO)

In Brooklyn, New York, over 20 first responders are studying Mandarin Chinese for about two hours a week. The class is the first of its kind. It is offered by the Fire Department of New York's Phoenix Society and the New York City Fire Department Foundation.

New York City is a diverse area. The U.S. Census Bureau recently reported that some New York neighborhoods are made up mostly of immigrants.

The Census Bureau also found that almost 200 languages are spoken in the city. So, knowing different languages is important, especially if you are a first responder.

Growing need
Lieutenant Steve Lee is president of the Fire Department's Phoenix Society. Lee says that first responders must be able to communicate quickly and effectively when an emergency happens. He explains that first responders enters neighborhoods and communities to assist people regardless of where they are from.

Without help from homeowners and others, Lee adds, discovering exactly where a fire is burning can be a real problem. First responders need to ask questions such as "What building? What address? What apartment?" And one of the most important questions, "Is there anybody left in the building and where?"

The Census Bureau findings demonstrate the great need for multilingual skills. There are currently 450,000 non-English speaking Asians in New York City. On any given day, only six Asian-American firefighters are working the city streets.

Lily Cheung is teaching Mandarin Chinese to the first responders. She calls the first group taking the classes "amazing."

Cheung says she can see amazing progress they have made with this language, which -- according to her – is one of the hardest languages in the world.

She explains that these first responders work long hours. Some, she says, come to class right after working a night shift without resting in between. "This is really a dedicated group," she adds.

Chueng started teaching Mandarin when she was 11-years old. And she has her own method of teaching, something she calls the "Chinglish Way."

She says she first explains the English order of the sentence, followed by the Chinese order. Then she takes an English sentence and says it in Chinese. Cheung says breaking up the sentence and then combining the parts together can make it easy for students to understand.

One of her students is first responder Doraun Ellis. He has been a paramedic for 14 years.

Ellis explains that Cheung goes to each and every single student in the class and goes over the lesson until the whole class understands it completely. He adds that the teacher really shows the class how to use the language they are learning.

Ellis adds that the more he is able to communicate with a patient on an emergency call, the more at ease that patient feels.

The students have already used their language training. Jacob Dutton has been a firefighter for 10 years. Recently, he followed up on a report of a gas leak in an apartment building.

Dutton says he arrived to an apartment where the two residents spoke only Mandarin. Speaking Mandarin with them, he was able to find the gas leak and explain to the residents how to fix it.

Other Mandarin classes are planned, along with training in other languages.

In the Comments Section, let us know your opinions regarding first responders learning other languages. Or simply practice with the words and expressions found in the article.

VOA's Bernard Shusman reported on this story. Anna Matteo adapted it for Learning English. George Grow was the editor.

paramedic – n. a person whose job is to provide emergency medical care to sick or injured people who are being taken to a hospital

diverse – n. made up of people or things that are different from each other

dedicated – adj. devoted to a cause, ideal, or purpose

resident – n. living in a particular place usually for a long period of time