Update Required To play the media you will need to either update your browser to a recent version or update your Flash plugin.
By Marsha James
28 September, 2016


That music is Symphony No. 2, known as the Resurrection Symphony. Austrian Gustav Mahler composed the piece in the late 1800s.

Classical musician David Titcomb feels strongly about the composer and his work.

"Mahler is just... It's so evocative. It's so emotional and maybe those are cheap thrills, but to me they are deep emotional works especially the Resurrection Symyphony."

Music has filled Titcomb's life from almost the start. An inspiring music teacher handed young David a trombone to play in elementary school. He could barely make a sound at that time. But, he stuck with it.

Titcomb studied music at the State University of New York, Purchase. He went on to receive a Master of Fine Arts degree at Yale University School of Music.

David Titcomb played the trombone professionally for more than thirty years. He says it was a difficult decision to stop playing and to do something else.

"When I had to decide to stop my career as a player and move on to just the organizing of an orchestra, it was my heart and soul to play in orchestras and after a 30 year career I think I had done my part and wanted to move aside, now I'm semi-retired I only play the trombone in my wife's rock and roll band now, but for 30 years I was a member of the New York City Opera Orchestra and I also played very often with the Metropolitan Opera and various other freelance organizations and the New York City Ballet as well." 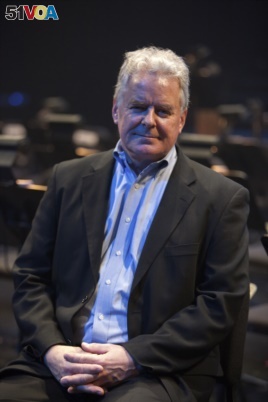 Now, Titcomb is the Managing Director for the Philharmonia Orchestra of New York (PONY). The organization held its first performance last March. It hopes to bring new audiences to classical music. It aims to make performances higher tech and more affordable.

Titcomb praises the more than eighty orchestra musicians, describing them as among New York's finest.

"The Philharmonia Orchestra of New York its comprised of many musicians who I have worked with over the last 30 years and many of them continue to work in the major companies at Lincoln Center including Metropolitan Opera, New York Philharmonic, New York City Ballet, New York City Opera and we came together shortly after the nuclear disaster and tsunami in Japan."

Mahler Symphony No. 2 music is reflective of a project dear to David Titcomb's heart.

David Titcomb has worked effortlessly along with PONY Principal Conductor Maestro Atsushi Yamada on bringing the Philharmonia Orchestra of New York and more than 100 choral students from Japan together to perform. The program is called Project Hand-in-Hand.

Project Hand in Hand aims to use performance to support disaster relief, cultural exchange, and education.

David Titcomb says it is a collaboration.

"With our good friend Atsushi Yamada whose our conductor who we worked with at New York City Opera back in the early 2000s and we started as the friends of Japan orchestra we played a concert actually it was Resurrection symphonies about a year after the disaster in northern Japan and we brought over 100 kids just to kind of show them that we were still paying attention and we wanted to give them some inspiration to continue to deal with their troubles and manage."

"Bringing the kids over to play at Lincoln Center a lot of these kids have never been out of there prefecture let alone been on a jet into New York to perform at Lincoln Center. So seeing an orchestra of 90 players on the stage and making music together with a chorus of 200 that what makes me smile."

Hand in Hand was created in response to the earthquake and tsumani in Japan. Earlier this year, Japan marked the 5th anniversary of the earthquake and tsunami that devastated the country in 2011. More than 18,000 people died or disappeared. The 9.0 magnitude quake struck offshore, creating a huge, powerful surge of water that rushed inland. Whole towns were destroyed in moments. And, the tsunami caused a major failure at the Fukushima Daiichi nuclear plant. The result was the worst nuclear disaster the world had ever seen.

More than 150,000 people were forced to leave their homes. Many have not been able to return because of radiation danger.

David says just like the Resurrection Symphony No. 2 by Mahler the music starts dark and has feelings of loss and by the end of the symphony, it is a triumph resurrection and things are reborn. This is the hope David Titcomb and PONY have for the victims of the 2011 disaster in Japan.

evocative adj. bringing thoughts, memories or feelings into the mind

thrill – n. a feeling of great excitement or happiness

resurrection – n. the act of causing something that had ended or been forgotten or lost to exist again

symphony – n. a long piece of music that is usually in four large, separate sections and that is performed by an orchestra

semi-retired – adj. working only part time at a career or job because you have reached the age at which you no longer need to work full-time

freelance – adj. working for different companies at different times rather than being permanently employed by one company

comprise – v. to be made up of something

reborn – adj. brought back to life