Immigrants Told: 'This Land is Your Land, Too'

Update Required To play the media you will need to either update your browser to a recent version or update your Flash plugin.
By VOA
22 June, 2014

More than four million first-generation immigrants live in New York State. Government officials, community activists and activists working for immigrants often talk about the many complex issues that immigrants face. But people who care for the different needs of immigrants often have trouble agreeing on a plan of action. Today, we go to a conference designed to change that.

Cesar A. Perales is the secretary of state for New York State. He spoke at a conference called "This Land is Your Land, Too."

"I think the importance of today is that we're seeing representatives of the community-based agencies, not-for-profit groups who work with immigrants coming down, sitting with government officials both at the New York City, state and even the federal government level, learning about each other, wanting to work with one another to ensure that the system works well."

Mr. Perales says his state has an economic interest in welcoming immigrants.

"From a very selfish perspective, these newcomers are very, very important to our economy. They provide labor. They start businesses. And so we wanna to make sure that immigrants will stay in New York, understand that they are wanted in New York."

Nisha Agarwal is New York City's commissioner for immigrant affairs. She wants to make it easier for immigrants to stay in the city. She supports efforts to help undocumented immigrants become U.S. citizens one day -- or at least receive legal permission to stay. 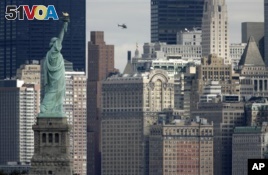 For more than 100 years, the Statue of Liberty has welcomed immigrants arriving in New York City. (AP)
"People's lives are transformed. They're, they can be pulled out of poverty and stay out of poverty if they have appropriate legal status."

"Breadwinners being deported and permanently removed from their family -- kids entering (the) foster care system because of that, and just people living in fear because they don't have appropriate immigration status. That's not in anybody's interest."

She says one recent study found that 25 percent of young immigrants were able to stay in the United States legally, but they did not know it.

"They've been living undocumented and they don't have to be. And I think that's astounding."

Camille Mackler is a lawyer for the New York Immigration Coalition, which organized the conference. She says providing correct legal information to immigrants living in cities and in rural areas can be difficult -- but for different reasons.

"In New York City, we face communities that are a lot more insular, a lot more closed-in on themselves, where we're having a hard time getting the trust of the communities to have them to come out and meet with representatives outside of their communities to get help. Upstate, the problem is that they're spread out, they're a lot more widespread, and they are also not participating in any sort of civic life -- they're not part of the towns. They purposely stay outside of the towns. They fear profiling, they fear discrimination, and they fear law enforcement."

The New York Immigration Coalition operates a program to train citizens who are not lawyers. Other groups make it easier for immigrants to attend English classes, and to connect skills with job training. They also work with immigrants to help them start a business. They want immigrants to know that this land is their land, too.
Related Articles
go top