Update Required To play the media you will need to either update your browser to a recent version or update your Flash plugin.
By Dan Friedell
11 July 2022


When the setting sun lines up just right with the buildings in New York City, it is called "Manhattanhenge."

The name combines the words "Manhattan," New York City's central area, and "Stonehenge," an ancient group of stones in Britain.

The sun sets in line with the tall buildings in the city four times each year. 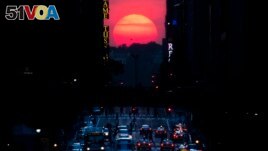 FILE - The sun sets along 42nd Street in Manhattan during an annual phenomenon known as "Manhattanhenge," when the sun aligns perfectly with the city's transit grid, Wednesday, May 29, 2013, in New York. (AP Photo/John Minchillo, File)

At about 8 p.m. local time, people will be able to see the sun going down along the Hudson River on the city's west side.

For the fourth time this year, however, it will be a special view. That is because the buildings along the wide streets that go East and West perfectly frame the sun.

The effect is "more dramatic," observers say, further east in the city. You can even see it from some parts of the borough of Queens.

The term "Manhattanhenge" comes from famous astrophysicist Neil deGrasse Tyson. An astrophysicist studies the physics and chemistry of stars. DeGrasse Tyson came up with the name in a 1997 magazine piece. He said he thought of it because he went to see Stonehenge in Wiltshire, England when he was a boy.

DeGrasse Tyson was part of a group of scientists who came up with the idea that Stonehenge was an ancient astronomical observatory. In England, the rays of the sun hit the stone circle at the summer solstice. The solstice is the day when the sun reaches its northernmost point in the sky and also marks the start of summer in the Northern Hemisphere.

The ancient people who built Stonehenge between 5,000 and 3,500 years ago probably planned for their structure to line up with the setting sun. But those who built the tall buildings and laid out New York City did not plan for the special sunsets. It just worked out that way.

Some people still take time to celebrate the event.

People gather on the streets about 30 minutes before sunset and start taking pictures.

Other cities with street layouts similar to New York also have their "Henges." In Baltimore and Chicago, they happen in March and September. In Toronto, it happens in February and October.

But in New York, it is more "striking," because of the tall buildings and the long view along the wide streets all the way to the Hudson River.

Dan Friedell adapted this story for Learning English based on reports by the Associated Press.

frame– v. to appear inside an open structure in way that is similar to the way a frame contains a picture

view –n. the things that can be seen from a particular place

striking – adj. unusual or extreme in a way that gains people's attention