Update Required To play the media you will need to either update your browser to a recent version or update your Flash plugin.
By Gregory Stachel
19 October 2022


New Zealand's government is ending its support for a popular program on the British playwright William Shakespeare.

Shakespeare wrote plays and poems during the late 1500s and early 1600s. He is considered by many to be one of the most important writers in the English language.

The art agency said the program depended too heavily on busy schools, failed to show relevance to today's art, and depended on a kind of art linked to British imperialism. 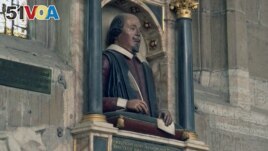 But many have criticized the decision by the art agency Creative New Zealand. Prime Minister Jacinda Ardern is among the critics. She also was a former student actor who took part in the program.

Ardern said, "I was a participant in Shakespeare in Schools. I thought it was a great program."

She said students interested in drama and debate have limited opportunities to connect with other students from different schools.

She said, "I was one of those kids. And so I would like to continue to see other kids have those opportunities."

Ardern added that the financial decision was not up to her or the government. Creative New Zealand receives financial support from taxpayers but is run independently.

The Shakespeare Globe Centre New Zealand has run the school programs, workshops, and events for about 30 years. Students act, direct, make clothing for plays, or create musical performances. The plays are set in current times or have different story elements from the ones written by William Shakespeare more than 400 years ago.

The center has received about ten percent of its yearly budget from the government agency.

Dawn Sanders is the center's chief. She said she was not expecting the rejection last month. It remained in place after a recent meeting. She criticized the decision.

Sanders said more than 120,000 students have been involved in the events and programs over the years. Many go on to work in the theater or film.

Others, she said, have used their acting skills in their jobs. For example, lawyers can become better at arguing their cases and doctors at talking to patients.

In its 11-page rejection note, however, one agency member said the center had "proved the ongoing value" of its local and national Shakespeare competition model. Some 4,600 young people join 24 events each year.

The agency official wrote, "The application does make me reflect on the ongoing relevance of Shakespeare." The person questioned if supporting Shakespeare "is most relevant for a decolonizing Aotearoa in the 2020s and beyond." Aotearoa is a native name for New Zealand.

The group that made the decision said that the Shakespeare center seems "paternalistic" and that its request for financial support did not show the relevance to art of current times.

Sanders said she would try to find other financial support and promised the program would continue. Since the dispute became public, she said, people have already given thousands of dollars online.

Ardern said it would be wrong to take a single financial decision and make it a statement about society. She did not say what Shakespeare role she had played as a student, saying it would steal attention from the situation.

She said, "So I might just leave out the details for now."

relevance – adj. relating to a subject in an appropriate way

imperialism – n. the effect that a powerful country or group of countries has in changing or influencing the way people live in other, poorer countries

drama – n. the art or activity of performing a role in a play or show

opportunity – n. a situation in which it is possible for you to do something that you want to do

reflect – v. to think carefully about something

paternalism – n. the attitude or actions of a person or organization that protects people and gives them what they need but does not give them any responsibility or freedom of choice