Update Required To play the media you will need to either update your browser to a recent version or update your Flash plugin.
By Andrew Smith
14 December 2022


New Zealand passed a law on Tuesday to set a lifetime ban on buying cigarettes for any person born after January 1, 2009.

This means that the minimum age for buying cigarettes will keep going up and up. And someone trying to buy cigarettes 50 years from now would need to show that they were at least 63 years old. Those who violate the law could face fines of up to $95,000.

But New Zealand health officials hope smoking will decrease well before then. They have stated a goal of making the country smoke-free by 2025. 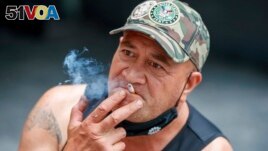 The ban is part of the new anti-smoking laws that are among the strictest in the world. The law reduces the number of shops that can sell tobacco products from about 6,000 to 600. It also decreases the amount of nicotine permitted in smoked tobacco products. Nicotine is an addictive element in tobacco.

"There is no good reason to allow a product to be sold that kills half the people that use it," Associate Minister of Health Dr. Ayesha Verrall told lawmakers in Parliament.

She added, "thousands of people will live longer, healthier lives and the health system will be $5 billion better off from not needing to treat the illnesses caused by smoking."

New Zealand has one of the lowest adult smoking rates among developed countries. The Organization of Economic Cooperation and Development, or OECD, said the number of adult New Zealanders smoking fell by half over the past 10 years to eight percent. And OECD data shows 25 percent of French adults smoked in 2021.

Smoking rates remain higher among the indigenous Māori in New Zealand, with about 20 percent reporting they smoked. Verrall said the new laws would help close the life expectancy gap between Maori and non-Maori citizens.

While most lawmakers support the new laws, the ACT New Zealand party spoke out against the legislation. They said many small stores would go out of business because they would no longer be able to sell cigarettes.

Brooke van Velden, a leader of ACT, said the ban would create an illegal market and cause problems. "No one wants to see people smoke, but the reality is, some will," she added.

Around the world, only Bhutan has a stricter anti-smoking law. The small Asian country banned cigarette sales in 2010.

Andrew Smith adapted this story for VOA Learning English from reporting from the Associated Press and Reuters.

addictive -adj. referring to some thing or some activity that makes you want to keep using it or keep doing it

gap -n. a difference in amount or quality between two things