Update Required To play the media you will need to either update your browser to a recent version or update your Flash plugin.
By John Russell
10 December 2021


New Zealand's government believes it has come up with a new plan to end tobacco smoking: a lifetime ban for those aged 14 or younger.

Under a new law the government plans to pass next year, the lowest age to buy cigarettes would keep rising year after year.

The yearly increase could mean that 65 years after the law takes effect, shoppers could still buy cigarettes — but only if they could prove they were at least 80 years old. 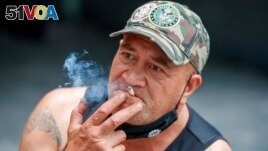 New Zealand Smoking BanA man sits while smoking in Auckland, New Zealand, Thursday, Dec. 9, 2021. New Zealand's government believes it has come up with a unique plan to end tobacco smoking, a lifetime ban for those aged 14 and under. (AP Photo/David Rowland)

Officials hope smoking will disappear many years before then. The new plan sets a goal of having fewer than 5 percent of New Zealanders smoking by 2025.

Other parts of the plan include allowing only the sale of tobacco products with very low nicotine levels and reducing the number of stores that can sell such products. The changes would be brought in over a set period of time to help sellers deal with the market changes.

The minimum age to buy cigarettes in New Zealand is now 18 years old. So, the lifetime smoking ban for youth would not have an effect for a few years.

In a discussion with The Associated Press, New Zealand's Associate Health Minister Dr. Ayesha Verrall said her work at a public hospital in Wellington involved telling several smokers they had developed cancer.

"You meet, every day, someone facing the misery caused by tobacco," said Verrall, who is organizing the new plan. "The most horrible ways people die. Being short of breath, caused by tobacco."

For years, smoking rates have fallen in New Zealand. About 11 percent of adults smoke, with 9 percent smoking every day. Daily smoking remains high among Indigenous Maori at 22 percent. Under the government's plan, a new group would be created to help reduce smoking among Maori.

Big tax increases have already been put on cigarettes in recent years. Some question why the tax levels were not increased even further.

"We don't think tax increases will have any further impact," Verrall said.

Verrall added the tax measures have a greater effect on lower-income people, who are more likely to smoke.

The new law would not deal with vaping. Verrall said that tobacco smoking is far more harmful and remains a leading cause of preventable deaths in New Zealand, killing up to 5,000 people each year.

New Zealand's plan to ban the next generation from tobacco smoking has not been tried elsewhere, she said.

But she said studies have shown youth tobacco sales decrease when minimum ages are raised. In the U.S., the federal minimum age to buy tobacco products was raised from 18 to 21 two years ago.

While public health experts have generally welcomed the New Zealand plan, not everybody is happy.

Sunny Kaushal said some stores could be put out of business. Kaushal leads the Dairy and Business Owners Group, which represents nearly 5,000 corner stores and gas stations in New Zealand.

"We all want a smoke-free New Zealand," he said. "But this is going to hugely impact small businesses. It should not be done so it is destroying dairies, lives and families in the process. It's not the way."

Kaushal said the tax increases on tobacco had already created an illegal market that gangs were operating in, and the problem would only get worse. He said smoking was already nearing its end in New Zealand and would disappear on its own.

Kaushal described the new plan as "being driven by academics."

But Verrall said she did not believe the government was going too far, because data show that most smokers want to quit anyway.

Nick Perry reported on this story for the Associated Press. John Russell adapted it for Learning English. Susan Shand was the editor.

nicotine – n. a substance in tobacco that makes it difficult for people to stop smoking cigarettes

minimum – n. the lowest number or amount that is possible or allowed — usually singular