Update Required To play the media you will need to either update your browser to a recent version or update your Flash plugin.
By Dan Friedell
17 November 2022


Scientists in New Zealand are looking for a way to stop cows from burping.

A burp is when an animal releases gas from its digestive system through its throat.

To some, a cow burp might seem like a small thing. But in New Zealand, cows outnumber people two to one. There are only five million people in New Zealand. The nation is home to 10 million cows and 26 million sheep. 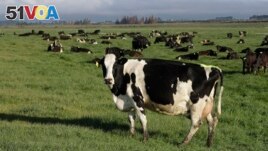 FILE - Dairy cows graze on a farm near Oxford, New Zealand, on Oct. 8, 2018. New Zealand scientists are coming up with some surprising solutions for how to reduce methane emissions from farm animals. (AP Photo/Mark Baker, File)

Cows do not easily digest the grass they eat. Instead, they ferment it in multiple parts of their stomach. The process releases a lot of gas. So, every time someone eats beef or drinks milk, the process of getting that product comes at a high cost to the environment.

The cows produce methane gas. While the gas does not last as long in the atmosphere as carbon dioxide, it has a much stronger effect on global warming.

The scientists in New Zealand are working on ways to reduce the amount of gas that comes out of the cows. They are considering changing the food the animals eat, putting a device on the cows that changes the methane into something safer, or even giving them a vaccine.

There is also talk of feeding the cows a special red seaweed or giving them a food addition known as a probiotic, which would help them digest the grass.

The fight against methane is serious in New Zealand. The country promised to reduce the gas produced by farm animals by up to 47 percent by the year 2050.

In addition, farmers want a solution. That is because New Zealand announced plans to tax farmers whose animals produce too much gas. The farmers say they would lose money if the tax plan goes into effect.

Peter Janssen is one scientist working on a solution. He works for AgResearch, a company owned by the New Zealand government. Janssen said the microscopic organisms, or microbes, that live in the cows' stomachs and produce the methane do not actually help digestion. The scientists believe anti-methane treatments would not hurt the cows or the quality of their meat or milk.

One idea is a vaccine that would reduce the number of microbes living in the cows. Another is an inhibitor, which would do the same thing. Janssen said both ideas, however, are several years away from being ready.

Another plan is to breed animals based on how much methane they produce. Some sheep and cows are tested in laboratories. The ones that produce less methane can then be used to breed more animals. The plan could reduce the amount of methane by 15 percent, scientists say.

Sinead Leahy is the top science advisor at the New Zealand Agricultural Greenhouse Gas Research Center. She said the country has made "great progress" in breeding sheep that produce less gas.

Other scientists are working to change the animals' food. The problem with sheep and cows in New Zealand, however, is that they walk around outside and eat grass. It is hard to control their food compared to cows in other countries that come inside to eat. That means one food additive made by a company in the Netherlands is not as helpful in New Zealand.

So instead, scientists are trying to change the genetic makeup of the grass and other ground covering the animals eat while outside. A genetic change might reduce the compound in the grass that is hard to digest. The problem with that solution, however, is that New Zealand has strict rules on genetically modified crops. Those rules would need to be changed.

Another possibly easier idea comes from farmer Aidan Bichan. He runs Kaiwaiwai Dairies in the town of Featherston, outside of the capital of Wellington. He said he is working to get more milk from each cow. The increased efficiency means he does not need as many cows, which in turn reduces the amount of methane coming from his farm.

"At a farm level, we've got to do our bit to help save the planet," Bichan said.

digest –v. to change foods by a biological process into something that can be used by the body

ferment –v. to go through a chemical change that results in the production of alcohol

inhibit –v. to prevent something from happening

emission –n. something sent out or given off

additive –n. something, such as a chemical, added to something to improve it in a small way

modify –v. to change a small part of something without changing the whole thing

efficiency –n. the ability to do something without wasting unnecessary time or resources

bit –n. a small part or contribution to an activity or process