New Zealand Plans to Be Rid of Pests by 2050

Update Required To play the media you will need to either update your browser to a recent version or update your Flash plugin.
By Jonathan Evans
29 March, 2019


New Zealand is three years into what many consider to be the world's largest animal protection program. The Predator Free 2050 government program has a goal of removing all non-native pests by the year 2050 to protect the country's native wildlife.

One area on New Zealand's South Island has not heard the sounds of native birds in years. This is because of predator pests, including possums, rats and stoats.

Dave Butler is the head of the Brook Waimarama Sanctuary near the city of Nelson. He directed a program that dropped poison from a helicopter, which killed pests in the sanctuary area. This permitted native animals to increase in number once again.

"We saw the first season after the pest removal big increases in some of the common birds here, the tuis and the fantails and so on."

The sanctuary was completed in September 2016. It takes seven hours to walk around the pest-free area. Butler says there are plans to expand the project.

"We have got the opportunity of working back into the city from here. It is a 10 minutes' drive away and bringing these amazing birds back into peoples' gardens. And then this way we have sort of got 100,000 hectares of native forest to start restoring and bringing that back, and that all ties into the very exciting, challenging vision the country has of predator-free 2050..."

Butler added that settlers who arrived in New Zealand introduced animals such rats, possums and stoats that put native wildlife at risk. 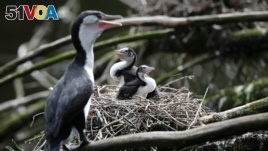 In this March 22, 2017 photo, two shag chicks sit on a nest with their mother at Zealandia in Wellington, New Zealand. (AP Photo/Mark Baker)

Sky Davies is the manager of Tasman Environmental Trust. She said she does love the idea of killing animals. But she sees it as a necessary step toward saving New Zealand's native species.

"So if we want to save species that are only found in New Zealand, nowhere else in the world, the unfortunate fact is that we need to kill these predators that are causing their demise."

But some people consider the Predator Free 2050 project to be problematic.

Jamie Steer is a senior biodiversity advisor at the Greater Wellington Regional Council. He said he does not expect the program to work.

"One of my biggest issues with Predator Free 2050 is that it sets up public expectations that it just cannot possibly live up to. It creates the impression that the removal of just five introduced mammals will be a game-changer for conservation in New Zealand, when it would actually be nothing of the sort."

Still, hundreds of community conservation projects and science and environmental agencies have joined the government's war on pests.

Phil Mercer reported this story for VOA News. Jonathan Evans adapted it for Learning English. Ashley Thompson was the editor.

demise – n. the end of something that is thought of as being like a death

game-changer – n. a newly introduced element or factor that changes an existing situation or activity in a significant way

impression - n. an idea or belief that is usually not clear or certain