Update Required To play the media you will need to either update your browser to a recent version or update your Flash plugin.
By Mario Ritter
19 January 2023

Ardern was 37 years old when she became the head of the government of the southern Pacific island nation and U.S. ally. The Labour Party politician will have served five and one half years when she officially leaves power.

Many observers say she was an example of a new kind of leadership. However, more recently, Ardern has faced increasing political pressure to step down. 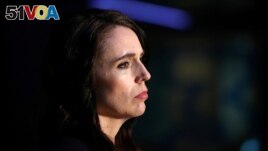 The prime minister told reporters in Napier that her last day in office would be February 7. She said: "I know what this job takes, and I know that I no longer have enough in the tank to do it justice. It is that simple."

Labour Party lawmakers will vote for a new leader on Sunday. New elections are to take place on October 14.

Ardern became prime minister in 2017. She was a generation younger than other world leaders. She became the second world leader to give birth while in office. Her life partner is Clarke Gayford.

She won praise for the way she dealt with a mass shooting in March 2019. A gunman attacked a Muslim religious center in Christchurch, killing 51 people. Ardern and her Labour Party then pushed through parliament a law banning most semiautomatic guns. Police bought back more than 50,000 guns from New Zelanders under a government program.

About nine months after the shooting, 22 foreign visitors and local guides were killed in a volcanic explosion on White Island.

Early in the COVID-19 world health crisis, Ardern won praise from many for the way she dealt with public health. Her government ordered lockdowns and severe measures to prevent the spread of COVID-19. However, by 2021 the prime minister was forced to ease the zero-tolerance policy. Highly infectious versions of the virus had spread around the world by that time.

Demonstrations against government vaccination requirements began in 2022, continued several weeks and ended with fighting between protesters and police. The Royal Commission of Inquiry is expected to present a report on the government's COVID-19 policies next year.

In 2020, her Labour Party gained the most seats in parliament. But, current public opinion studies show her party has less support than the conservative opposition.

Ardern said: "I am not leaving because it was hard." But she added that her position involved the responsibility "to know when you are the right person to lead, and also, when you are not."

Her supporters blamed angry people for opposition to her leadership. Actor Sam Neill said on Twitter: "Her treatment...in the last few months has been disgraceful and embarrassing."

But Australian Prime Minister Anthony Albanese said she "has shown the world how to lead with intellect and strength."

Ardern was first elected to parliament in 2008. Before joining government, she was a policy expert for former British Prime Minister Tony Blair and was elected president of the International Union of Socialist Youth.

Nick Perry reported this story for the Associated Press. Mario Ritter adapted it for VOA Learning English with additional sources.

semiautomatic –adj. of a firearm : able to fire repeatedly through an automatic reloading process but requiring release and another pressure of the trigger for each successive shot

zero-tolerance –adj. to use the strongest measures to punish or prevent something

net-zero –adj. describing a system in which what is released is exactly balanced by what is taken in

intellect –n. the power of knowing; the capacity for thought especially when highly developed

empathic (empathetic) –adj. the quality of projecting one's own personality onto other people in an effort to understand them better