Update Required To play the media you will need to either update your browser to a recent version or update your Flash plugin.
By Bryan Lynn
07 June, 2017


A 25-year-old American is the first defendant in a criminal case involving leaked government documents since Donald Trump became president.

Reality Leigh Winner has been charged with removing secret documents from a United States government office.

The Justice Department said Winner was arrested last Saturday. It said she was working for a government agency in the state of Georgia.

A document provided by an agent of the Federal Bureau of Investigation (FBI) said she admitted to printing secret intelligence reporting and sending it to a news website.

The court document said Winner had email contact with a news website, which it did not name. Media organizations reported that officials with knowledge of the case said the secret documents were given to The Intercept.

On the same day charges were announced against Winner, The Intercept published a report it said was based on top-secret documents from the National Security Agency (NSA). 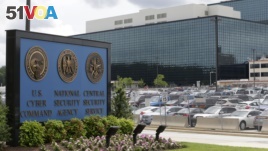 The National Security Administration campus in Fort Meade, Md., where the U.S. Cyber Command is located.

The Intercept reported the NSA documents showed that Russian hackers spent months trying to gain access to computers used by local election officials. The effort reportedly involved techniques designed to trick people into unknowingly providing login information that hackers can then use.

The website said the first targets were companies that provide local governments with software programs for organizing voter registration records. Later attacks were reportedly aimed at local election officials themselves in the days leading up to the November 8 vote.

It is unclear how successful the reported attacks were. The Intercept said an NSA investigation "does not draw conclusions about whether the interference had any effect on the election's outcome."

The U.S. intelligence community found in a report in January that Russian President Vladimir Putin had ordered an influence campaign to target the U.S. elections. The report said Russia's goal was to undermine trust in the election process. Russia also wanted to harm candidate Hillary Clinton's chances of winning against now-President Donald Trump, the report said.

Russian officials have repeatedly denied that their country took steps to interfere in the election. But Putin recently said that Russian "patriots" with no ties to the government may have been involved in hacking.

The FBI and several congressional committees are currently investigating the issue. The investigations are exploring whether Trump or any of his team may have worked with Russian intelligence officials during the campaign.

Trump has dismissed the claims as "fake news." He has sought to direct attention on leaks about the issue to the media.

Bryan Lynn wrote this story for VOA Learning English, based on reports from VOA News, the Associated Press and Reuters. George Grow was the editor.

hack – v. secretly get access to the files on a computer or network in order to get information and/or cause damage

patriot – n. someone who loves their country and is proud of it

collude – v. secretly work with others to do something, especially illegal or dishonest

fake – adj. not real or true