Update Required To play the media you will need to either update your browser to a recent version or update your Flash plugin.
By Mario Ritter
29 June, 2018


Employees at a small newspaper in Maryland published their paper on Friday, the day after a gunman killed five of their co-workers. At least two others were injured in the attack.

The front page of the Capital Gazette read "5 Shot Dead at The Capital" with photos of the five workers. The paper is based in Annapolis, the capital of the state of Maryland.

Reporters from the paper covered the story. Some told about their personal experiences during the shooting.

Phil Davis, the paper's crime reporter, hid under his desk while the shootings took place. He tweeted, "there is nothing more terrifying than hearing multiple people get shot while you're under your desk and then hear the gunman reload."

The opinion page of the paper, however, did not comment about the incident. It said "today we are speechless," but promised to return the next day. The paper's publisher said, "We will honor our colleagues' memories by continuing our mission."

Those killed included Rob Hiaasen, a writer and editor, Wendi Winters, a correspondent and Gerald Fischman, an editor. Others killed included John McNamara, a sports writer, and Rebecca Smith, a sales assistant.

Hiaasen was a reporter for the Baltimore Sun for more than 20 years. He was known as a thoughtful writer of unusual stories.

Winters was a reporter on community issues at the paper since 2002. A former editor for the Capital Gazette told AP, she was "the best part of the newspaper in that she cared so much about the city."

McNamara had reported on Maryland sports for more than 20 years and wrote two books on sports. 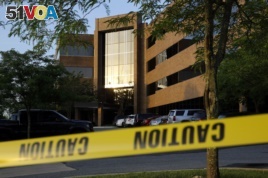 The gunman was identified as 38-year-old Jarrod Ramos. He has been described as not cooperating with police after his capture.

Ramos had a dispute of many years with the paper over a story it had written about a criminal case against him. He brought a legal case against the paper for harming his reputation which was thrown out in 2012. Ramos is said to have sent threatening tweets to some of the staff members years earlier.

Witnesses said the gunman shot through a glass door and then began shooting at employees in the newsroom using a long shotgun.

Police in Annapolis say Ramos also carried smoke bombs. The shootings were one of the deadliest attacks on reporters in U.S. history.

The Capital Gazette is one of the oldest papers in America. In 1767, its publisher Anne Catherine Green led opposition to the stamp tax in the years leading up to the American Revolution.

On Thursday, as the newspaper's office became a crime scene, employees gathered under a nearby parking garage to report and edit stories and photos for Friday's papers.

Photographer Josh McKerrow told the Associated Press, "It's what our colleagues would have done."

Mario Ritter adapted it for VOA Learning English based on AP news reports. Hai Do was the editor.

reputation –n. the common opinion that people have about someone